Oil and gas companies around the world have announced plans to divest non-priority assets with recoverable reserves totaling some 12.5 billion boe since December 2019, according to new analysis by Rystad Energy. 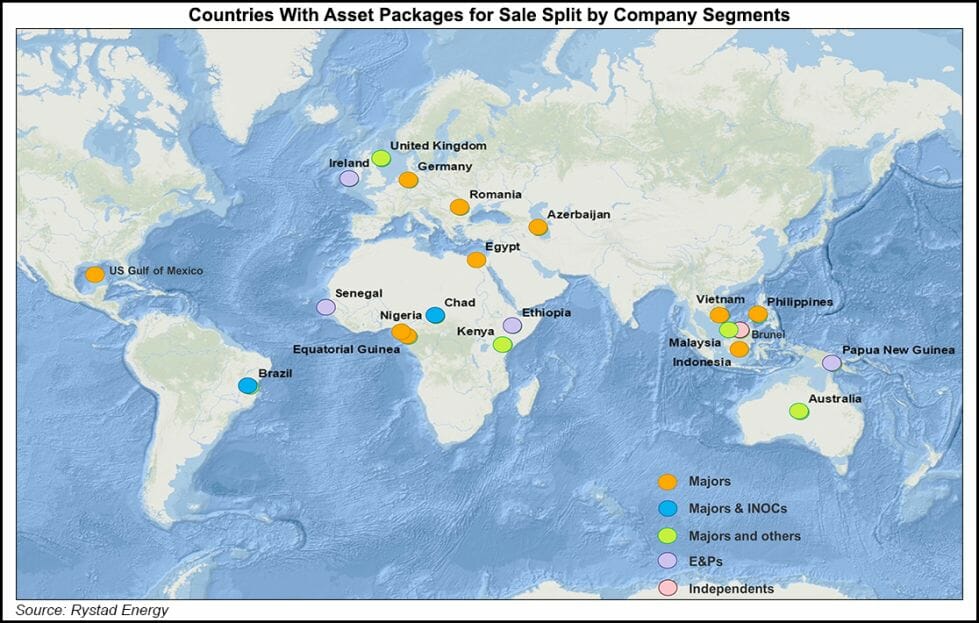 The resources on offer amount to more than 5 billion barrels of liquids and 7.5 million boe of natural gas, said the Rystad team led by Siva Prasad, senior upstream analyst.

The team highlighted that while some of the divestments were announced before Covid-19 decimated oil demand and prices, “more were added in reaction to the pandemic and its aftermath.”

The list does not include assets in the Lower 48 onshore segment, where consolidation also appears imminent as bankruptcies mount amid the current market turmoil.

“Many players are trying to divest their low-priority assets, while others are considering this the right time to break into the industry or expand their portfolios by acquiring these assets at a lower price,” Prasad said.

A majority of the resources up for grabs are in the producing phase, followed by projects in the pre-front-end engineering and design (pre-FEED) stage, analysts said. “In other words, companies are either getting rid of their mature portfolio to focus on key projects, or want to avoid additional greenfield costs in light of the current low crude price.”

Majors account for nearly 70% of the liquid volumes and 50% of the gas reserves tagged for divestment, the Rystad team said, citing ExxonMobil and Chevron Corp. as the leaders.

“ExxonMobil is looking for interested buyers for upstream assets in the U.S. Gulf of Mexico, the UK North Sea, Germany, Nigeria, Malaysia, Indonesia, Romania, Azerbaijan, Vietnam, Chad and Equatorial Guinea as part of its wider plan to generate $15 billion by 2021 and $25 billion by 2025 from divestments,” researchers said.

Chevron is seeking to offload its equity stake in eight Nigerian blocks, including shallow water and offshore assets, and is also mulling the sale of its 62% operated interest in the Indonesia Deepwater Development natural gas project.

Chevron has said that the project no longer competes in its portfolio.

France’s Total SA, meanwhile, is seeking buyers for its 12.5% stake in block OML 118 offshore Nigeria, as the major seeks to raise $5 billion from global asset sales by 2020.

Total and Tullow Oil plc are seeking to reduce their stakes in a massive onshore project in Kenya’s South Lokichar Basin valued at between $1.25 billion and $2 billion, analysts said, noting that a precise valuation of the project is not available since it has yet to reach a final investment decision.

Japan’s Inpex Corp. is considering farming out its Japan operations, namely the $45 billion Ichthys liquefied natural gas (LNG) project off Australia’s west coast, while BHP Group plc is mulling the sale of its assets in the Bass Strait fields off Australia’s southeastern shores.

Wood Mackenzie projected this week that global LNG demand will decline on a year/year basis this summer for the first time since 2012.

An estimated 104,000 square kilometers (40,155 square miles) of exploration acreage also is on offer worldwide, analysts said, of which about 83% is onshore.

The Nymex WTI contract for June delivery was trading at $36.52/bbl around midday Wednesday. By comparison, the Cushing, Oklahoma WTI spot price averaged $57.52 in January.