A group of producers has filed at FERC a protest to Sea Robin Pipeline Co.’s proposed rate increase, calling the request for increases of as much as 1,450% for gathering service — prompted, in large part, by declining gas receipts — “excessive.” 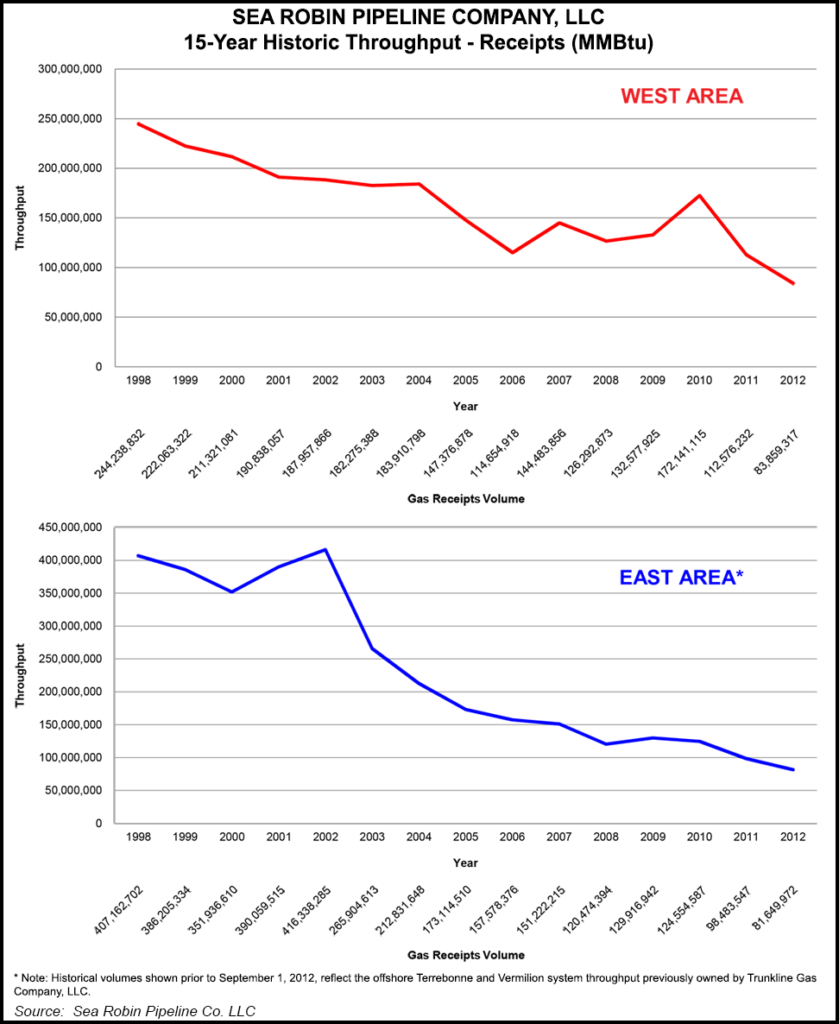 Facing declining production in the area spanned by its 900-mile Gulf of Mexico gathering and pipeline system, Sea Robin, in a Dec. 2 filing with the Federal Energy Regulatory Commission (FERC), proposed substantial rate increases. The increases are based on a $65 million cost of service using a base period of the 12 months ending Aug. 31, 2013, adjusted for the nine months ending May 31, 2014, the rate case filing said.

If approved, the increase would hike Sea Robin’s West Area system transmission rates “to levels between 270% and 280% of current levels, and nearly 1,450% for gathering service,” according to a protest filed by Chevron USA, ExxonMobil Gas & Power Marketing Co., Fieldwood Energy, Hess Corp. and Shell Offshore Inc. In addition, Sea Robin’s East Area system transmission rates would increase about 244%, and gathering rates there would increase approximately 544%, they said. Numerous other parties have intervened in case.

“The magnitude of these increases requires that the Commission set this filing for hearing to examine whether the proposed increases are just and reasonable,” the companies said. They asked FERC to review Sea Robin’s major cost of service components, including a proposed return on equity of 13.5%, “which appears excessive in comparison with equity return levels the Commission has recently approved on other interstate pipelines.”

Principal causes for the proposed rate increase identified by Sea Robin include depreciation, increases in asset retirement obligations (ARO) and “a decline in billing determinants and throughput,” as well as a $2.1 million unrecovered Hurricane Surcharge balance, and a proposed cost allocation and rate design.

Throughput on the East Area system in 2012 was down more than 80% compared with 1998, and throughput on the West Area system was about one-third of what it was in 1998, according to the filing. Combined throughput on both systems went from about 651 Bcf in 1998 to 166 Bcf in 2012. Testimony filed with the pipeline’s rate case said that “based on the current estimated production levels, the proved and potential reserves would be depleted in each of the [system’s] sub-areas no later than nineteen years from May 31, 2014, the end of the Test Period in this proceeding.”

The producers also want to examine in detail Sea Robin’s calculations of the AROs, that is the obligations to retire or decommission a plant asset, which typically include removing or dismantling the asset in place.

The hurricane surcharge, which Sea Robin first proposed in 2009, has been a point of contention between the pipeline company and producers before (see Daily GPI, Sept. 15, 2009). Shortly after the original filing, ExxonMobil Gas & Power Marketing and Hess protested at FERC against the attempt by Sea Robin to collect a surcharge for extensive damages it incurred during Hurricane Ike and to install a mechanism to regularly institute surcharges for costs to repair damage from disasters beyond amounts covered by insurance.

There have been “significant changes” since Sea Robin’s previous rate case, including the doubling in size of the company’s system through the acquisition last year of the Vermilion and Terrebonne systems offshore facilities from its affiliate, Trunkline Gas Co. (see Daily GPI, June 22, 2012).