The technical rally that lifted natural gas forward prices last week continued to fire on all cylinders during the Aug. 30-Sept. 4 period, with returning heat in long-range weather outlooks further fueling the momentum. 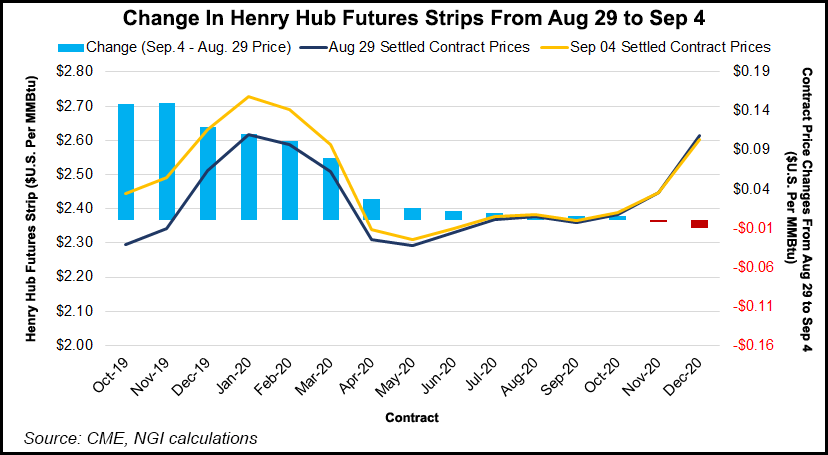 Roughly 15-cent gains were seen through the upcoming winter, while next summer barely edged up a penny and the winter 2020-21 strip held generally steady, according to NGI’s Forward Look.

After posting a record number of short positions in August, speculative traders have been at the forefront of extreme volatility in the natural gas market the last couple of weeks. Last week, the October contract’s less than 7-cent gain fell short of the expiring September contract’s 10-cent increase.

However, the new prompt month hit the gas pedal this week, soaring some 15 cents from Aug. 30-Sept. 4. Double-digit increases were seen through the winter strip (November-March), which rose 11 cents to $2.62.

“The startling gains of the past 12 days are partially due to a major short squeeze — one of the most extreme in several years,” EBW Analytics Group said.

However, weather has also had a hand in the dramatic run-up as models finally began showing hotter temperatures later this month after a couple of mild weeks. The latest changes were mostly in the 11- to 15-day time frame, with heat spreading more into the eastern United States and giving a slight boost to forecast gas-weighted degree days (GWDD), despite being in the second half of September, according to Bespoke Weather Services.

The pattern remains impressively hot over the South for the next couple of weeks, “where summer is in no hurry to go away yet,” Bespoke chief meteorologist Brian Lovern said. “Southern heat can remain supportive all the way into early October, but elsewhere, it is getting late to move the needle much, as we start to see some minor heating degree days show up historically in late September up north.”

Meanwhile, the projected demand destruction from Hurricane Dorian, once a category 5 storm, is not as pronounced as it once was and “probably not enough to be a notable factor in the natural gas market,” according to Bespoke.

However, there are still several weeks left in the peak of the Atlantic hurricane season, and Tropical Storm Gabrielle, which midday Thursday was about 885 miles northwest of the Cabo Verde Islands and tracking northwest, was expected to slowly strengthen through the weekend.

With speculators still holding roughly 200,000 net short contracts, according to the latest Commodity Futures Trading Commission data, a short-covering rally is still in the cards this fall, according to Mobius Risk Group. However, this is highly contingent upon heating demand ramping up before the Thanksgiving holiday.

Meanwhile, daily storage data is indicating weekly Energy Information Administration (EIA) injections are on the rise, but as of yet, there still are not any concrete signs of a triple-digit streak, according to Mobius.

“If the speculative community holds onto its current position through calendar month September, it could make for a sharp move higher late this year,” the Houston-based firm said. “Conversely, if short positions are exited too early, producers may get excited about 2020 prospects and fail to consider the longer-term ramifications of multi-year sub-$2.75 realizations.”

On Thursday, the EIA reported an 84 Bcf injection into storage inventories for the week ending Aug. 30. The slightly larger-than-expected build was much larger than both last year’s 64 Bcf injection and the five-year 66 Bcf build.

By region, the EIA reported a 37 Bcf injection in the Midwest and a 32 Bcf build in the East. The Mountain region refilled 4 Bcf, while the Pacific saw a net pull of 2 Bcf. In the South Central, a 13 Bcf injection into non-salt stocks was partially offset by a 2 Bcf withdrawal from salt, according to EIA.

“Current South Central non-salt levels are quite healthy,” Enelyst managing director Het Shah said during a weekly chat discussion of the EIA report. “It’s been tracking with the five-year average since early July. Salt, on the other hand, is sitting near the lows of the five-year bracket.” But this is “less concerning with production growth sitting on the sidelines to make up the high winter demand days.”

The latest storage stat was enough to at least temporarily put a halt to the recent surge in natural gas prices. The October Nymex contract, which opened Thursday’s session at $2.442, fell to a $3.288 low after the EIA report crossed trading desks. The prompt month went on to settle Thursday at $2.435, down just a penny on the day. November moved fractionally lower to $2.491.

EBW, which had expected a pullback to occur, said the recent run-up likely reset market sentiment, with prices likely remaining higher than previously expected even after a retreat.

Meanwhile, other factors are also expected to influence the market in the coming weeks. Cheniere Energy Inc. has started planned maintenance at Train 5 of its Sabine Pass liquefied natural gas (LNG) terminal, with feed gas deliveries plunging about 1.5 Bcf from last week’s peak.

Partially offsetting that decline is the slow ramp-up in gas flows to Mexico on the Sur de Texas-Tuxpan pipeline. Genscape Inc. said that on Wednesday, both Sur de Texas-Tuxpan (SDT) and Valley Crossing revised their previous day’s reported flow values upward to indicate about 70 MMcf/d had been delivered to SDT on gas days Sept. 3 and Sept. 4.

Since Aug. 1, the firm has not seen more than 6 MMcf/d flow and is hesitant to attribute these volumes to the start of a large ramp-up, but rather preparations. Genscape does expect commercial operations to begin this month, “although we do not expect the ramp-up to be as large as it would have otherwise been” had Comision Federal de Electricidad not previously contracted to receive three LNG cargoes in September.

Genscape also recently delayed to February 2020 its modelled in-service date for the Wahalajara pipeline, which will move Permian Basin gas into central Mexico via a telescoping system ranging from 1.5 Bcf/d capacity at its head to 0.9 Bcf/d at its terminus. The firm cited the ongoing dispute between the Mexican government and the project’s developer, Fermaca, as the reason for the delay.

There are plenty of variables that could make for an interesting shoulder season in the natural gas market. However, with demand set to wane in the coming weeks as fall temperatures arrive, the stage could be set for a drop in prices just as dramatic as the recent rally, according to EBW.

The analytics firm pointed to the January 2020 contract, which has been one of the main supports propping up the market in recent weeks. In recent years, the price of the January contract has seldom dropped below $2.50/MMBtu.

“When January 2020 briefly dropped to $2.487 intraday last Friday (Aug. 30), futures rallied strongly, with January pulling up the front month. With January still more than four months away, support at $2.50 is not likely to be easily broken,” EBW said. “If and when it fails, however, both January and the prompt-month contract could quickly move down another 10 cents or more.”

Strong gains in the California cash market spilled over into forwards this week. Several pipeline maintenance events that limited imports into California drove the cash rally, which pushed prices in the southern part of the state above $4 and prices in the northern areas above $3.

Pacific Gas & Electric (PG&E) limited flows on its Redwood Path to 1,860 MMcf/d on Thursday, restricting a route that made up around 1,950 MMcf/d of supply for PG&E during the month of August, according to Genscape.

Meanwhile, Southern California Gas (SoCalGas) was performing in-line inspections on Line 4000, one of the import lines that has been restricted for months along with L235-2 and L3000.

The Mojave Pipeline was cutting Segment 3000 flows by about 65 MMcf/d versus the 30-day average, according to Genscape.

“…With its tenuous import capacity cut further by this maintenance, SoCalGas will likely resort to increased storage withdrawals to meet higher system-wide demand and could even execute more withdrawals from Aliso Canyon depending on system balancing dynamics,” Genscape analyst Joseph Bernardi said. “SoCalGas withdrew from that storage field last week, the first time this had been done under the new, less-restrictive Aliso Canyon Withdrawal Protocol that went into effect earlier this summer.”

The resulting cash strength, combined with the previously announced delay of L235, pushed forward prices sharply higher through the upcoming winter as the expected drawdown of Aliso Canyon supplies weighed on the market.

Both PG&E Citygate and Malin posted gains across their curves that were more in line with Nymex Henry Hub futures.

Across the country in the Northeast, Algonquin Citygate prices were also considerably higher than the rest of the country, particularly for the winter. This could be due to the deficit that storage inventories in the EIA East region currently hold to the five-year average. As of Aug. 30, East gas stocks were at 714 Bcf, 21 Bcf below the five-year average.

On the opposite end of the spectrum, NGPL S. TX forward prices trailed the much larger gains across the rest of the country given the not yet fully realized flows to Mexico. October was up just a nickel to $2.261, and November was up 9 cents to $1.447. The winter package also gained 9 cents to $1.65, and the summer 2020 strip stayed flat at $1.21.