Gas purchases for power load are likely to be off significantly as forecaster WSI Corp. is expecting mild conditions across major power grids. In its morning forecast it predicted that PJM should see “a cold front slide across the Mid Atlantic [Tuesday] into Wednesday morning with another round of heavy showers and storms, which may be strong. Meanwhile, unseasonably cool and less humid conditions will overspread western PJM. Generally fair, seasonably cool and less humid conditions should overspread the power pool during Wednesday into Thursday.

“High pressure will slowly erode during the end of the week into the weekend. This may allow temperatures and humidity levels to creep back up, which may result in the increasing chance for widely scattered showers and storms. Rainfall amounts may range 0.25-1.”

Power generation in Texas (ERCOT) may also take a hit as “a cold front will continue to sag southward [Tuesday] and will be a focal point for scattered showers and storms across central and eastern portions of the state, including San Antonio, Austin and Houston,” the forecaster said. “A disturbance may dive into the south-central U.S. during late Wednesday into the end of the week with the potential for heavy rain and thunderstorms. Conditions should gradually improve during the weekend, though there will remain a chance of isolated showers and storms. Rainfall amounts may locally exceed 1-3 inches across northern and eastern parts of the state, which may support flooding.”

Traders see somewhat supportive weather beyond this week’s cool spell. “This week’s unusually cool patterns are expected to be replaced next week by more normal trends with some warming conditions along the eastern seaboard. While these updated forecasts don’t appear sufficient to ignite much of a price advance, they do appear capable of sharply restricting downside price follow-through,” said Jim Ritterbusch of Ritterbusch & Associates in closing comments Monday to clients. “While we are still leaving room for slippage to the $4.05 area, we will strongly caution against fresh shorts even on a rally back to today’s highs. However, we still see a soft spot trading environment this week due to much below normal temps with the August-September switch swinging to contango for the first time since last September by mid-week.

“The most probable course of trade through the rest of this week is some further consolidation mainly within today’s range into Wednesday when pre-EIA positioning could crank up price volatility. Any additional tilt toward warming east coast trends toward month’s end could easily push nearby futures to the $4.24 level prior to Thursday’s storage report offering further guidance. We will also be looking to re-establish bull spreads into the fall-winter portion of the curve on any additional shifts toward warm weather.” 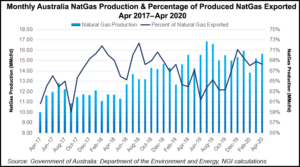 Australia’s leading producer Woodside Petroleum Ltd. expects to impair close to $4 billion against the value of its portfolio, including one-time charges for its prized liquefied natural gas (LNG) projects, on reduced energy demand from Covid-19 and the subdued outlook for commodity prices. Woodside said Tuesday it expects to record total impairments through the first…