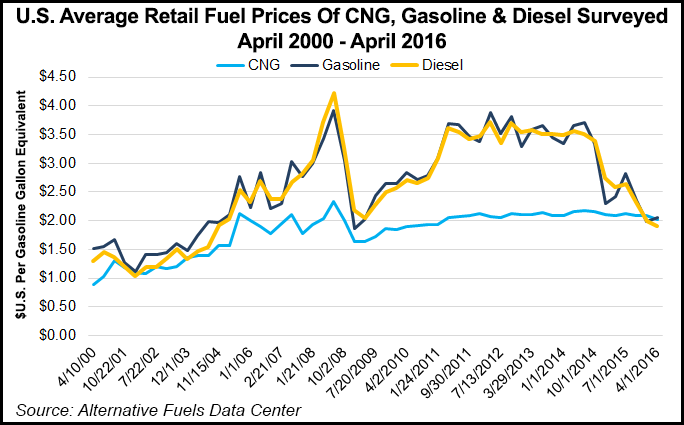 Hexagon’s CNG Automotive Products division will merge with Santa Ana, CA-based Agility, whose CEO, Kathleen Ligocki, will carry the same role in the newly merged entity. The new company will manufacture CNG cylinders for use in its onboard fuel assemblies as well as for direct sale in offices in the United States, Canada, Latin America, Norway, India and Southeast Asia.

The merger, the terms of which were not disclosed, is expected to close in the third quarter. The new company will be owned equally by Hexagon Composites’ and Agility’s current investors, making both fuel cylinders and the systems putting them to use in NGVs.

Hexagon’s trademarked “Mobile Pipeline,” Hydrogen Products, and Light-Duty Vehicle divisions will continue to operate under Hexagon Composites and are not part of the merger.

Agility and Hexagon two years ago established a joint venture under which the lightweight Type IV all-composite CNG Hexagon fuel cylinders are used in the Agility fuel assemblies.

“[The merger] is a natural progression of our existing joint venture arrangement and will expand our ability to create unique value for our customers by deepening our technical capabilities and expanding our reach globally,” said Sam Gabbita, general partner at Element Partners, Agility’s lead investor. Hexagon Composite’s CEO Jon Erik Engeset called natural gas “a key component of the global green shift.”

Ligocki described the merger as a marrying of two companies that are “market leaders with strong backgrounds in engineering creativity, profitable growth and operational excellence.” She said the merged company intends to have a global impact in the NGV commercial vehicle markets.

Meanwhile, a recently created Salt Lake City-based company, Nikola Motor Co., that is promoting a new CNG-fueled electric-drive Class 8 truck said it has generated $2.3 billion in new vehicle reservations from potential buyers of more than 7,000 of the original equipment manufactured near zero-emission trucks.

Very aggressive plans for what is described as a ground-breaking Nikola One truck that would be leased with CNG fuel included came last month amid much fanfare by the company’s CEO Trevor Milton (see Daily GPI, May 19).

Nikola officials said the new CNG/EV trucks are designed for a program to lease them for $4,000-5,000/month, depending on the truck configuration and options, including the first million miles of CNG fuel. “An average diesel-fueled truck burns more than $400,000 in fuel and consumes $100,000 of maintenance costs in the first million miles of operation; these costs are eliminated with the Nikola One,” company officials contend.

“It incorporates revolutionary improvements in compressor design and intelligent engineering, resulting in ultra-low vibration and noise in a compressor that is unparalleled in scalability, parts commonality and overall performance,” a Clean Energy spokesperson said. The new compressor is available in 150 hp and 300 hp configurations.

Clean Energy CEO Andrew Littlefair called the advanced compressor “revolutionary” in its efficiency and ability to perform at the “highest levels of compression performance” in the industry. Clean Energy engineers went back to the drawing board and re-engineered an advanced new compression product, Littlefair said.

This week also marked the opening of new public access CNG fueling stations in Kentucky and New York state. American Natural Gas (ANG) opened one in its headquarters town of Saratoga Springs, NY, and Georgetown, KY. The New York station is the first CNG fueling located between Albany, NY, and Montreal in Canada.

In Kentucky, ANG opened the new station with Bestway Express trucking fleet as its anchor tenant for the CNG fueling complex.

ANG officials touted the Kentucky location as a transportation hub as the state’s fleets are located within a 600-mile radius of 60% of the U.S. population and 58% of the nation’s manufacturing facilities.

Out West, conference sponsors announced additional speakers for the “Rethink Methane” program in Sacramento, CA, June 29-30 for stakeholders in the bioenergy, hydrogen, fuel cell, solar, wind and natural gas industries. Among the presentations will be ones on renewable natural gas (RNG), looking at public policy, regulations and incentives to increase the production and consumption of RNG.

Rethink participants will be able to tour the Sacramento BioDigester, the largest anaerobic digestion system of its kind in North America, getting a first-hand look at the processing of organic waste.