A pipeline disruption that bottled up West Texas and Midcontinent supplies headlined spot price action from May 27-May 30, the four-day trading week reflecting gas traded for May delivery; the NGI Weekly Spot Gas National Avg. finished 0.5 cents lower at $2.030/MMBtu. 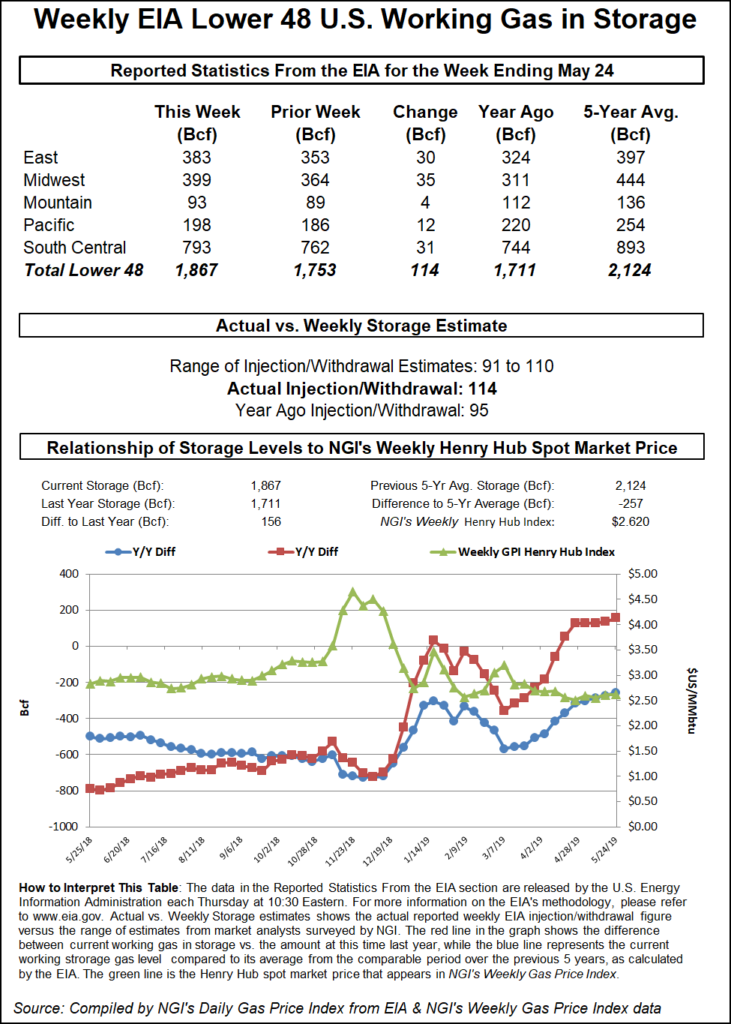 A force majeure restricting northbound flows on the Natural Gas Pipeline Co. of America (NGPL) system appeared to wreak havoc on spot prices in the Midcontinent and in West Texas during the week. As has occurred on multiple occasions in recent months, Permian Basin locations saw prices veer well into the negatives. Waha fell 21.0 cents on the week to average minus 82.5 cents.

What had not occurred until recently were the negative trades in the Midcontinent. NGPL Midcontinent saw the worst of the downward price pressure, dropping $1.190 to average 17.0 cents on the week, including trades as low as minus $1.500.

Downstream of the NGPL constraint, Midwest prices were mixed for the week. Chicago Citygate added 3.5 cents to $2.380, while Michigan Consolidated slid 1.5 cents to $2.360.

Elsewhere, with recent record-level heat in the Southeast expected to ease over the weekend and into the week ahead, prices in the region pulled back slightly. Transco Zone 4 shed 4.5 cents to $2.550.

Provided an opening by an outsized inventory build and a mild forecast, and on a day of broader uncertainty among investors, bears strengthened their grip on the natural gas futures market Friday. The Nymex July futures contract dropped 9.3 cents to settle at $2.454 after trading as low as $2.444 on the day. Week/week the front month fell 14.4 cents, with the June contract settling at $2.598 the Friday before.

After rallying 5.1 cents on Wednesday, the last day of trading for the June contract, the front month plunged a combined 17 cents during Thursday’s and Friday’s sessions. The $2.454 settle price Friday roughly matches the lows recorded in late April, when the May contract settled as low as $2.455. Before that, the prompt month hadn’t settled below $2.500 since June 2016.

“We’re starting to develop export markets for natural gas. I think there’s a lot of anxiety now as to what might be available there,” Levine said. “Remember, we’re not the only ones that can interfere with the normal flow of business. So we could easily find…a lot of the markets that we thought might be useful as offtakers” for U.S. supply could close up, at least temporarily.

These concerns on the demand side come as strong production growth has driven large storage injections and put downward pressure on natural gas.

“I don’t think it’s out of the question that we could see natural gas, because of all the production we’re seeing, fall all the way down to” an “ultimate low” at $1.611, the low set back in March 2016, Levine said. “I’m not saying it’s going to happen, but I don’t think we can ignore that possibility.

“…I think this is not a good sign for the bulls. The question becomes, where does the next rally come from? And silence is deafening.”

Bulls may have to pin their hopes on a lift from forecasts, which as of Friday had not been particularly cooperative in terms of producing June heat.

“Weather patterns for the first half of June continue to show upper high pressure not being strong enough to expect widespread or impressive heat,” according to NatGasWeather. “With that said, weather patterns are likely to add a little demand over the weekend,” as the Global Forecast System did in its midday run Friday.

Weather-driven demand gains “would need to be considerable if builds are to finally print smaller than the five-year average,” the forecaster added.

The Energy Information Administration (EIA) on Thursday reported a much larger-than-expected 114 Bcf injection into U.S. natural gas stocks, overshooting estimates by a wide margin. The number easily tops both the 95 Bcf build recorded in the year-ago period and the five-year average 97 Bcf injection.

Prior to the EIA report, consensus had formed around a build in the high 90s to low 100s Bcf. A Bloomberg survey had pointed to a median prediction of 98 Bcf, based on estimates ranging from 94 Bcf to 104 Bcf. The 114 Bcf figure topped even the highest estimate submitted to this week’s Reuters survey, which had called for a 101 Bcf injection based on a range from 91 Bcf to 110 Bcf. Intercontinental Exchange EIA Financial Weekly Index futures settled Wednesday at 100 Bcf, while NGI’s model predicted a 98 Bcf build.

By region, EIA recorded a 35 Bcf build in the Midwest and a 30 Bcf injection in the East. Further west, the Mountain region refilled 4 Bcf for the week, while 12 Bcf was injected in the Pacific.

The South Central region posted a 31 Bcf weekly build, including 27 Bcf injected into nonsalt and 4 Bcf into salt stocks, according to EIA.

This week’s 114 Bcf U.S. natural gas build came in a “whopping” 16% ahead of Tudor, Pickering, Holt & Co. (TPH) forecasts, analysts said, “helping reduce the deficit to the five-year average to only 12%, compared to 14% a week ago.

“The larger than forecast build could reflect somewhat of a catch-up print, as the prior two weeks came in a combined 15 Bcf below expectations.”

Injections are coming in “faster than in years’ past, with this week’s build 20% higher than the five-year average and 19% ahead of last year; on a weather adjusted basis the market continues to be 3 Bcf/d oversupplied,” the TPH team said.

TPH noted that U.S. liquefied natural gas (LNG) feed gas demand remained strong this week, with volumes averaging 5.8 Bcf/d “amid growing concerns around weakening LNG demand out of Europe.” TPH’s preliminary modeling for next week’s storage report is showing a 107 Bcf build, “in line with the five-year average for the week, which typically represents trough demand for the year.”

This week’s injection implies the market was 5.3 Bcf/d looser than last year adjusting for weather, and the market has averaged 2.7 Bcf/d looser over the past four weeks, according to analysts with Raymond James & Associates.

Genscape Inc. viewed the figure as about 6.0 Bcf/d loose versus the five-year average when compared to degree days and normal seasonality.

In terms of balances, “May production has averaged around 87.1 Bcf/d, just ahead of April’s record production of 86.9 Bcf/d,” according to the Jefferies team. “Production is up 7.0 Bcf/d year/year, the lowest year/year growth since November 2017. Haynesville production has continued its climb, averaging a new high of 11.4 Bcf/d thus far in May.

“Waha pricing is clearly still weighing on Permian production, which is down around 170 MMcf/d sequentially and at the lowest level since September 2018. Appalachia production, at 31.2 Bcf/d, is down slightly versus April at 31.3 Bcf/d.”

On the demand side, LNG feed gas flows have averaged 5.6 Bcf/d in May, up 2.6 Bcf/d year/year and topping the previous monthly record of 4.9 Bcf/d set in March, the Jefferies analysts said.

“Sabine Pass Trains 1-5, Corpus Christi and Cove Point all ran near capacity during the month,” analysts said. “Cameron flows ramped up to around 320 MMcf/d in May (about 500 MMcf/d over the last week), and initial flows started at Elba Island and Freeport.”

In the spot market, fading Southeast heat and generally comfortable temperatures across the Lower 48 contributed to widespread discounts on deals for weekend and Monday delivery.

“Recent record-breaking heat across the Southeast will ease through the weekend as upper high pressure weakens and shifts toward Texas,” NatGasWeather said Friday. “Much of the rest of the country will be quite comfortable with highs of upper 60s to 80s, although still with pockets of heavy showers.

“The West and Plains had been quite cool in recent weeks but will warm nicely with highs of 70s to 90s gaining, including 100s across portions of California and the Southwest.”

Southern California Gas (SoCalGas) was scheduled to perform a one-day maintenance event Saturday that would cut imports into the pipeline-constrained region by nearly 600 MMcf/d and possibly even require withdrawals from the restricted Aliso Canyon storage field, according to Genscape analyst Joe Bernardi.

“However, demand is expected to be low, and the system may be able to accommodate the cut flows via other imports and other non-Aliso withdrawals,” Bernardi said.

For Saturday, the Wheeler Ridge Zone was expected to be limited to 167 MMcf/d of firm operating capacity to allow SoCalGas to conduct maintenance on its Line 225.

“This zone consists of SoCalGas’ receipt points with Kern, PG&E and Elk Hills,” Bernardi said. “Together, these three points have accounted for about 30% of all of SoCalGas’ receipts in the past month. They have averaged about 750 MMcf/d, which would translate to a cut of about 575 MMcf/d for this event. The pipe has called for a voluntary curtailment of electric generation, indicating that it believes withdrawals from Aliso Canyon may be necessary to secure alternative supply.”

Over the past month, SoCalGas receipts from points outside of the Wheeler Ridge Zone have averaged 1,800 MMcf/d and peaked at 2,200 MMcf/d, suggesting only about 400 MMcf/d of space to increase capacity elsewhere in response to Saturday’s scheduled constraint, according to the analyst.

“Storage withdrawals have maxed out at 215 MMcf/d in the last month without SoCalGas having to resort to Aliso Canyon,” Bernardi said. The utility was forecasting low demand for Saturday at under 1,900 MMcf/d, “driven by both the mild weather as well as the typically lower weekend demand numbers. This would put demand about 200 MMcf/d lower than the past month’s average.”

Further upstream in constrained West Texas, most locations posted hefty declines to drop firmly back into negative territory ahead of the weekend. El Paso Permian gave up 45.0 cents to average minus 47.0 cents.

Elsewhere, a number of locations across the eastern two thirds of the country posted discounts of a dime or more. In Appalachia, Dominion South slumped 10.5 cents to $2.100.

“Equitrans did not provide specific amounts as to how much gas will be restricted, but the impact will take place at Meter 24605,” which is associated with the Mobley facility, Ferrara said. This “will subsequently reduce operating pressures on the Equitrans Ohio Valley Connector (OVC) pipeline. With reduced pressures on the OVC line, Equitrans’ capability will be limited to deliver gas through the Plasma-OVC Compressor Station to Rover, Rockies Express and Texas Eastern (Tetco).

A force majeure event on May 19 affecting these two locations saw receipts at Meter 24605 drop by 400 MMcf/d and cut Plasma-OVC flows by 145 MMcf/d, Ferrara said.

Elsewhere in the region, between Monday and June 12, scheduled Tetco maintenance on the pipeline’s 24-inch diameter Line 2 between Waynesburg, OH, and its Uniontown, PA, compressor station could cut around 300 MMcf/d of interconnect receipts, Genscape analyst Josh Garcia said.

“As a result of this outage, receipts from Dominion at the Crayne interconnect and the Ridge Road gathering system will be cut,” Garcia said. “These locations have aggregated as much as 303 MMcf/d over the last 30 days,” mostly from the Dominion Crayne location, although volumes at these locations “have trended downwards in the last two weeks.

“Tetco has a number of interconnects with Dominion just in” its M2 zone, suggesting “many reroute options exist.”