Feed gas deliveries to U.S. export facilities have slipped to their lowest point in weeks as maintenance has cut flows to the Sabine Pass and Cameron terminals in Louisiana. 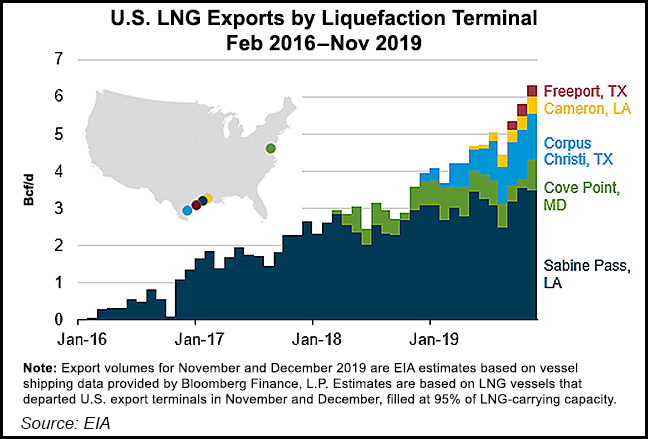 A five-day maintenance period started Monday on Creole Trail — the 94-mile, 1.5 Bcf/d pipeline that feeds Cheniere Energy Inc.’s Sabine Pass facility. Specifically, work on the Gillis compressor, which takes gas from other interstate lines was expected to impact 570 MMcf/d on Monday and Tuesday and 270 MMcf/d from Wednesday to Friday, according to a notice posted on the system’s electronic bulletin board (EBB). The pipeline’s entire capacity was offline for a short period Tuesday, according to the notice.

Meanwhile, Cameron LNG spokesperson Anya McInnis confirmed Tuesday that feed gas deliveries have been reduced due to scheduled maintenance on Train 2. The maintenance, McInnis said, is part of the commissioning process and is expected to last between 7-10 days. The first train entered service last year, while Train 2 is expected to be online this quarter.

Longer-term, Cheniere has also scheduled other maintenance on its Corpus Christi Pipeline. The Sinton compressor is expected to be offline for two six-day stretches in May and October, cutting 750 MMcf/d of flows to Corpus Christi LNG, or enough to shut down one train each month.

Maintenance is also scheduled at Cove Point LNG in Maryland for nearly two weeks in June. But Dominion Energy Inc. spokesman Aaron Ruby said the work won’t impact the facility’s larger export operations. Instead, a small liquifier for the company’s regulated services will go offline between June 2 and June 15, he said.

Outages and maintenance at U.S. export terminals can be difficult to track beyond the EBBs for pipelines feeding the facilities. The terminals aren’t required to release maintenance schedules. Ruby noted that Cove Point does not publicize those sorts of plans for Cove Point’s export facilities.

Six U.S. export facilities are currently in operation, but they face a global market flooded with natural gas and the prospect of liquefaction curtailments later this year if key markets in Northeast Asia and Europe can’t take in more cargoes.

Laurent Key, head of North American natural gas research for Bloomberg New Energy Finance, said in a research note that “some well-timed plant maintenance around the world” could help ease some of the excess supply this summer when demand falls off even more.

BNEF also noted that there is no additional maintenance scheduled yet for Sempra Energy’s Cameron feeder pipeline or on Boardwalk Pipeline Partners LP’s Gulf South line, which delivers to Freeport LNG.

Freeport spokesperson Heather Browne noted, however, that a third train at the Texas terminal is currently being commissioned with commercial operations scheduled to start in May.

Kinder Morgan Inc.’s Elba Island LNG, which shipped its first cargo in December, does conduct regular maintenance despite the recent start-up, said spokesperson Katherine Hill, but she added that no major outages are expected this year. Four LNG production units are already operating at the Georgia facility. The other six are expected to come online in the first half of this year.