Utility regulators in Maine approved a plan to support development of natural gas pipeline capacity — at ratepayer expense — to serve the state as long as other New England states join the effort. 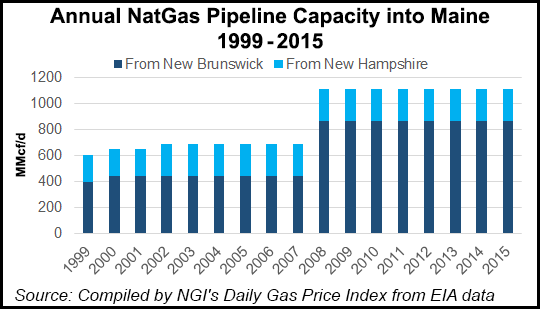 The unanimous vote Tuesday by the three Maine Public Utilities (PUC) commissioners follows a recommendation by commission staff against the plan (see Daily GPI, June 9). However, industrial consumers strongly supported the plan as a bulwark against spiking energy prices and plant shutdowns.

The docket is the result of the Energy Cost Reduction Act (ECRA), enacted by the state in 2013 (see Daily GPI, Oct. 31, 2014). ECRA authorizes the PUC to execute — after consultation with the state’s public advocate and the governor’s energy office — energy cost reduction contracts to acquire up to 200 MMcf/d of natural gas pipeline capacity a year, for an annual cost not to exceed $75 million. ECRA would allow the PUC to administer and resell the pipeline capacity acquired.

ECRA is a response to winter price spikes seen in Maine and other New England states in 2012 and 2013 when gas demand was high and gas-fired power generators were forced to pay top dollar for the fuel they needed. In opposing the plan, Maine PUC staff said earlier this year that since the period of price spikes, market rules have been revised; new pipeline capacity serving the New England region is expected over the next couple of years; and the two past winters of price spikes are starting to look like outliers compared with winters before and since.

Environmentalists opposed to pipeline development oppose the plan, while it has the support of industrial energy consumers.

In order for the Maine plan to proceed, though, other New England states — Massachusetts, Rhode Island, Connecticut and New Hampshire — must also step up. “There are so many more things that need to happen before a shovel gets turned or more gas begins to flow, and most of those things are outside of Maine’s control,” said Tim Schneider, Maine public advocate, as reported by theDaily News.

Spectra Energy’s Access Northeast project is one potential beneficiary of the move by Maine regulators (see Daily GPI, May 4). Two of the three commissioners voted in favor of entering talks with Spectra. Portland Natural Gas Transmission System also has a plan to get more natural gas to New England (see Daily GPI, Jan. 13, 2015), which is favored by PUC Commissioner Carlisle McLean, according to the Daily News. Northeast Energy Direct, a project of Kinder Morgan Inc., was withdrawn earlier this year for lack of customer interest (see Daily GPI,April 21).

In a June filing, the Industrial Energy Consumer Group (IECG) weighed in at the PUC in support of the plan to contract for pipeline capacity.

“An ECRC will provide positive benefits to Mainers…if there is a single year between 2020 and 2030 when worldwide LNG [liquefied natural gas] and oil prices are comparable to those experienced during 2013 or 2014,” IECG said. “Oil and LNG prices have risen and fallen unpredictably for more than 40 years. This is the prudent indicator of future prices in the long term, and using this indicator, there is no question but that an ECRC contract for Maine’s load-weighted share of the [Access Northeast] project is a cost-effective insurance policy.

“Most important, however, is the economic effect of eliminating the risk to businesses, including manufacturers, that electricity prices will spike uncontrollably in New England. This risk is the reality that has helped shut down five Maine paper mills in three years.

“This increased certainty to electricity prices may be the most important advantage of new pipeline capacity. Instead of facing the unmanageable risk of world LNG and oil prices, Maine consumers will pay for electricity based on a known price for transportation and the price of Marcellus [Shale] gas.”