Maine’s Public Utilities Commission (PUC) on Thursday approved a Summit Natural Gas of Maine request to provide service to customers in 17 municipalities in the Kennebec Valley region, a decision that could complicate matters for a competitor that already is building a new gas pipeline in part of the area.

The PUC decision comes with the implication that the Summit Utilities subsidiary can build necessary pipeline in the area, though permitting will have to be obtained before construction can begin. Summit estimated its project will cost $150 million and create 435 jobs, eventually serving 15,000 residential and industrial customers by its third year of operation.

“There will be follow-on proceedings in the upcoming weeks and months on specific topics such as safety protocols relating to situations where two companies install pipelines in the same street and Summit’s cost-of-gas rate mechanism,” a PUC spokesman told NGI. “Thursday’s vote was the main activity in the case, authorizing Summit to construct and operate as a Maine public gas utility.”

Tim Johnston, executive vice president of Summit Natural Gas of Maine, told the Kennebec Journal the company hopes to begin construction between an existing pipe in Windsor and the state capital, Augusta, this spring. Summit’s pipeline is designed to run north from the capital to Waterville and terminate at Madison, ME.

Last year, state officials selected Maine Natural Gas (MNG) to build an 80-mile gas pipeline to Augusta and the surrounding Kennebec Valley. MNG’s plan calls for a $19.3 million project, creating 40 jobs during the next two years. The decision was promptly appealed by Colorado-based Summit, which is in the process of acquiring Kennebec Valley Gas.

“We’re also concerned about the negative economic and safety consequences that might arise,” Hucko told NGI. “We’re a little concerned that if their pipe is in close proximity to ours, it could have some negative safety consequences. Chances of dig-ins, I think, increase greatly, and if there is a leak, will there be a delay caused by confusion over who owns what pipe and ‘who do I call’ and ‘who’s going to fix this,’ and delays getting a response could be disastrous.”

In October, MNG signed a 10-year agreement to supply gas to a new regional hospital in Augusta, a deal that could help MNG build the pipeline even if the state isn’t a customer (see Daily GPI, Nov. 1, 2012).

“That was really the catalyst for us to decide to start to put pipe in the ground, and we’ve been doing that since October, and so we’ve laid a lot of pipe,” Hucko said. 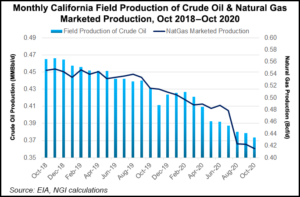 New oil and natural gas drilling hit historic lows in California last year while a renewed emphasis on abandoned wells turned up a record high number of permanently sealed wells, the state Geologic Energy Management Division (CalGEM) reported Wednesday. The severe downturn in permitting and new drilling can be seen as a result of the…