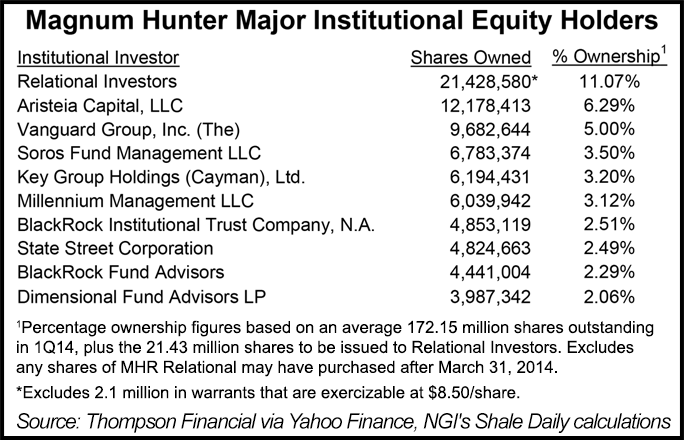 Relational, which typically works with companies to build value instead of calling for all-out changes, agreed to buy 21.4 million shares for $7.00 each. It also is receiving 2.1 million warrants with an exercise price of $8.50. MHR has a market value of $1.3 billion. The news sent the share price higher by almost 5% to around $7.38 in early trading Wednesday.

“Our interest in increasing our investment in Magnum Hunter coincided with some very attractive opportunities for the company to extend its growth and long-term strategic plans,” Whitworth said. “This investment reflects our confidence in Magnum’s outstanding management team and their strategic plan.”

The investment is designed to help support the operator as it expands in Appalachia’s Marcellus and Utica shales. The investment would be used to add another drilling rig, buy more leases and repay debt.

MHR CEO Gary C. Evans said he welcomed Relational’s “continued involvement and support, as both a preeminent oil and gas investor and proponent of long-term value creation for all shareholders.”

Topeka Capital Markets’ Gabriele Sorbara said the new funds would reduce MHR’s liquidity concerns. “Within our coverage universe, we believe MHR is the best way to play the dry gas Utica Shale in Ohio/West Virginia…While liquidity is still on the tight side heading into 2015, we believe the company’s asset base provides numerous opportunities to improve its balance sheet/capitalization.”

Analyst Irene Haas of Wunderlich Securities Inc. said the investment was a positive move for MHR and buys it “time and wiggle room.” The placement helps bridge a funding gap of $140 million for the second half of this year, assuming the same capital expenditures. However, “realistically, we expect the company to dial up spending,” she wrote. “For this reason, the company might still raise money after August. Proforma for the deal, MHR is expecting total liquidity of $208.5 million.”

Wunderlich’s net asset value (NAV) and price target on MHR of $13.00/share will be revised once there’s more information on the 2014 spending plan.