A multi-pad drilling project to test Marcellus and Utica formations in southern Ohio may answer some of the lingering questions about the real resource potential of the Utica/Point Pleasant Shale, an analyst said Tuesday. 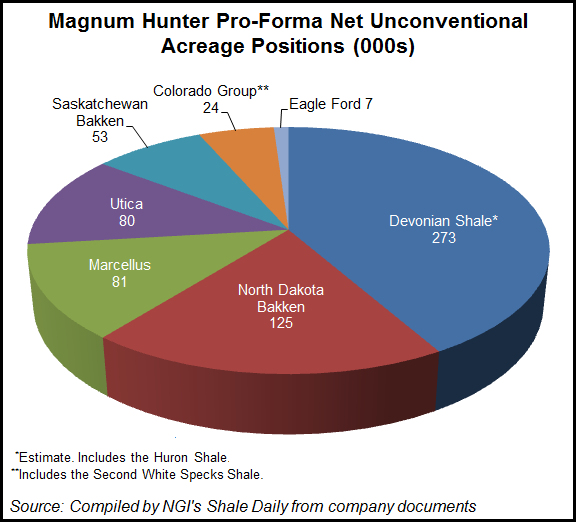 Magnum Hunter Resources Corp., with partner Eclipse Resources LLC, earlier this year launched a 1,950 net-acre project in Monroe County, OH (see Shale Daily, Jan. 3). The partners sketched out plans to drill 12 horizontals each in the Marcellus and Utica over the next three years.

Magnum officials on Tuesday unveiled more of the project design. The Stalder pad in Monroe is designed to drill up to 10 Marcellus and eight Utica wells using a new Schramm T500XD robotic drilling well. Monroe County, which borders West Virginia, is flanked by Ohio’s resource-rich Belmont County to the north, Washington County to the south and Noble County to the west. West Virginia’s Marshall County is northeast of Monroe, Tyler County is southeast, and Wetzel County is east.

“The eastern portion of Monroe County is an exciting region for us, especially due to our significant acreage position and the ability to exploit so many wells on just one drilling pad site targeting both the Marcellus and Utica formations,” said CEO Gary Evans. “This will be our first well utilizing our new…rig, which should create significant savings on costs as well as time. As we continue to delineate our acreage position in southeast Ohio, we anticipate significant production growth coming from this region.”

Magnum drilled its first Utica target earlier this year in Washington County (see Shale Daily, April 15). The Farley well is to be tested in September after a resting period. The company currently holds 81,000 Marcellus acres and 80,000 Utica acres.

The Monroe County plan is first to drill a Marcellus well, followed by a second targeting the Utica formation. Magnum subsidiary Triad Hunter LLC is operating the first well, and it holds a half-stake in the drilling unit.

The development plan is to drill both Utica and Marcellus wells first, fracture stimulate them, and subsequently test the wells sometime toward the end of this year. Magnum’s midstream subsidiary Eureka Hunter Pipeline LLC now is laying a 20-inch diameter high pressure gas line to the Stalder pad, with first deliveries anticipated in October.

“This is a new concept and we don’t think the upside is fully quantified and understood,” Wunderlich Securities Inc.’s Irene O. Haas said Tuesday. She’s interested in the combined estimated ultimate recovery potential from the combo play.

The Utica/Point Pleasant, said Haas, “will not be sleepy for long.” Magnum already has a good understanding of the Appalachian Basin, she said. The producer was a first mover in West Virginia, where it has about 81,000 net acres, and it also has 80,000 net acres that are Utica-prospective, mostly in Ohio.

The Utica’s potential has remained a bit of a mystery because drilling progress to date has been stymied by a lack of infrastructure. Many of the lingering questions should be answered before the end of the year, said Haas. “We believe the next catalysts for this play will come from southern Ohio.”

Haas pointed to a few things that should provide more transparency. Magnum and PDC Energy Inc. by the end of this year each expect to have well test results from Washington County (see Shale Daily, June 20; March 20).

In addition, privately held Antero Resources LLC, an Appalachian Basin powerhouse,is readying a $1 billion initial public offering, which would reveal more of its drilling information to date (see Shale Daily, June 17; May 14). Antero, noted Haas, “has 320,000 net acres in southwestern Marcellus, and 100,000 net acres in the Utica” in Ohio, both liquids-rich belts. “In addition, the company has 194,000 net acres prospective for Devonian Shales.” Antero, with two rigs running, has completed 10 horizontals in the Utica, with one well online and nine awaiting infrastructure.

Also of note, Haas said, are Eclipse’s plans. Eclipse late last month “made a sizeable acquisition,” with plans to ramp up to five rigs in the Utica (see Shale Daily, July 1). Eclipse more than doubled its holdings in the Utica in a deal to acquire Oxford Oil Co. LLC, and with it 184,000 net acres and 13.8 Bcfe of proved developed producing reserves.

This year “looks to be a big year for the Utica as infrastructure improvements should enable more wells to come online by year’s end,” said Motley Fool’s Matt DiLallo. “While results will probably continue to be lumpy in the short-term, in time, we should have much more consistent results as producers can better target the best spots in the play.”

The play “is really becoming hit or miss,” DiLallo said. “That being said, when a company hits, it’s usually a really big hit. That gives both producers and investors hope that the play will turn out to be just fine.”

Utica leader Chesapeake Energy Corp. has drilled close to 250 wells to date, but “just 66 are currently producing,” said DiLallo. At the end of last month Chesapeake had 64 producing wells in the play (see Shale Daily, May 30). “The company has another 86 wells waiting on pipelines, with 97 more in various stages of completion. Chesapeake sees these wells, as well as those yet to be drilled, to significantly add to its production this year.”

Chesapeake is producing about 60 MMcfe/d, in the Utica today, “but it expects to end the year with net daily production of about 330 MMcfe/d. So it expects these wells to deliver great results. As additional Chesapeake wells come online, it will help investors get a better idea of what to expect.”