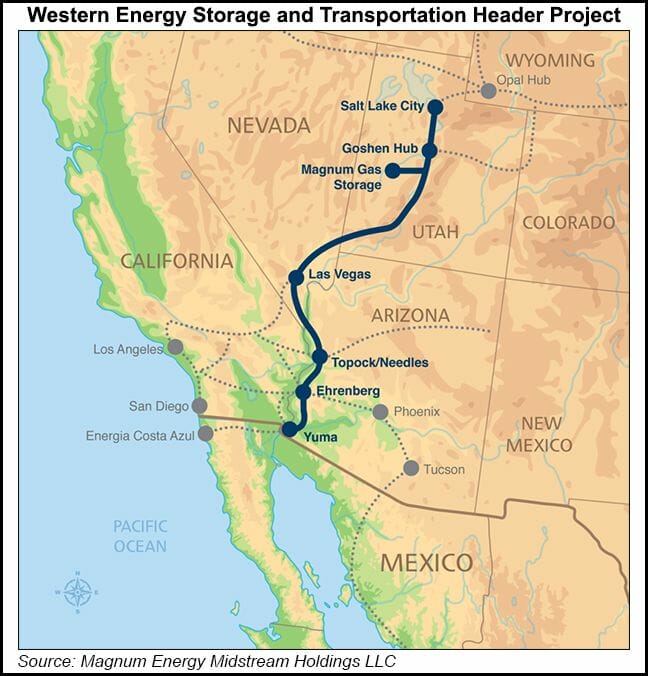 The Western Energy Storage and Transportation Header Project has been in the works for years and would utilize 40 Bcf of salt cavern storage under development by a Magnum affiliate near Delta, UT. The storage facilities were approved by the Federal Energy Regulatory Commission in 2011.

Magnum said the open season would begin at 9 a.m. MT on July 2 and end at 5 p.m. MT on Aug. 31. The large-diameter pipeline would provide access to natural gas supplies at or near the Opal Hub in Wyoming, the Goshen Hub near Salt Lake City, UT, and Permian Basin volumes flowing westbound to locations at or near Ehrenberg, AZ.

The header system would allow for receipts and deliveries into the Salt Lake Valley, the Las Vegas, NV, market, the Southern California market and the Phoenix/Tucson market in Arizona. Magnum said it could also potentially be a gateway to international exports to Mexico at Yuma, AZ, and West Coast liquified natural gas exports via Energia Costa Azul, an import terminal in Baja California, Mexico that’s being converted for exports.

The open season comes as the Western U.S. energy markets are in flux with more solar and wind capacity being added, tighter pipeline balancing requirements, long-term reliability issues with existing infrastructure and other uncertainty from coal and nuclear retirements.

It can sometimes take days for natural gas traveling over long distances through pipelines to reach its destination in the vast region. Places like California and Arizona, where solar and wind power are being added to the grid rapidly, have threatened gas demand, but they’ve also made the fuel that much more important.

A completed “expression of interest” form should be emailed to Holder at kholder@magnumdev.com or Christine Wallat at cwallat@magnumdev.com. The forms and more information can be found at www.westhp.com.