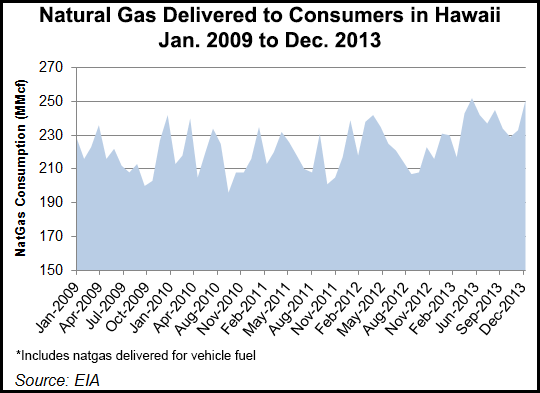 A Hawaiian unit of Macquarie Infrastructure Co. had asked the Hawaii Public Utilities Commission (PUC) in late 2012 for approval to bring in containerized LNG (see Daily GPI, Oct. 2, 2012). Macquarie’s Hawaii Gas is the only company in the state with authorization to introduce LNG into the state’s energy mix.

As the only state-franchised full service gas company in Hawaii, Macquarie’s gas distributor intends to ship LNG from the U.S. mainland and use it as a backup fuel source for its synthetic natural gas operations on Oahu as a means of increasing the reliability of its fuel supply to residential and commercial customers. Regasified LNG and synthetic natural gas are virtually identical.

Hawaii Gas has an application pending at FERC seeking authorization to operate facilities that “will be used to receive, unload, load, store, transport, gasify or process natural gas that is sourced on the continental U.S. and transported by waterborne vessel to Hawaii.”

It is the first of what the company has outlined as a three-phase Federal Energy Regulatory (FERC) application process that would add facilities incrementally, building the eventual capability to supply gas for up to 75% of its customers’ requirements, and provide fuel for up to 400 MW of power generation facilities and for industrial and other commercial applications.

Hawaii Gas said it intends to use International Organization for Standardization (ISO) containers to ship the LNG to Oahu on conventional container ships, rather than LNG tankers. ISO containers typically hold 10,000 gallons of LNG, which would be regasified and mixed in the local utility’s distribution pipelines in Honolulu using a mobile vaporization unit.

The source of the U.S. gas supplies and the site of the liquefaction have not been identified.

Noting that Macquarie’s Hawaii unit has been pursuing an LNG strategy for several years, CEO James Hooke said with the prospect of LNG use he looks forward to Hawaii Gas lowering the cost of the energy it provides.

Last year a study at the University of Hawaii concluded that LNG could cut oil-based energy bills in Hawaii substantially during the next 20 years (see Daily GPI, Jan. 9, 2013). On Oahu, natural gas would cost about half of what oil would through 2030, according to the report, which was compiled by Honolulu-based consulting firm FACTS Inc. for the university’s Hawaii Natural Energy Institute. But the study added the caveat that before making any final determinations, LNG planners need to carefully consider questions about sourcing and terminal site options.