Canada’s dormant arctic natural gas production and pipeline scheme Thursday requested a seven-year extension of its right to come out of its deep freeze, now set to expire at the end of this year. 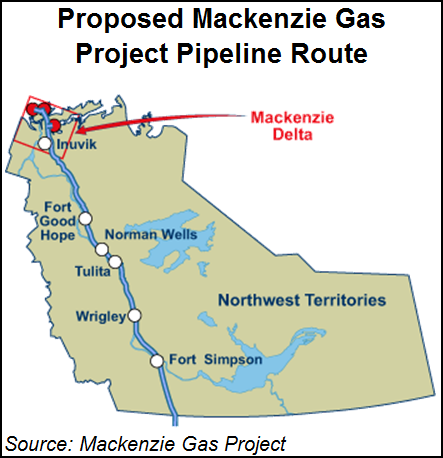 Resetting the drop-dead date to Dec. 31, 2022 would “provide time to determine if the currently oversupplied North American natural gas market will recover,” Mackenzie Gas Project (MGP) leader Imperial Oil said in a filing with the National Energy Board (NEB).

The request to extend the sunset clause in the MGP’s 2010 construction approval is backed by Northwest Territories Premier Robert McLeod and three of the four native communities in the project region: the Inuvialuit and Gwich’in on the Mackenzie Delta, and the Sahtu Dene and Metis in the central Mackenzie Valley.

The supportive native societies share a stake in the proposed Mackenzie Valley Pipeline as members of the Aboriginal Pipeline Group with a one-third ownership interest. The fourth community along the route, the Deh Cho in the southern Mackenzie Valley, has not exercised its option to join the MGP and does not endorse the sunset clause request.

Imperial said, “The MGP proponents continue to believe that, despite current natural gas market-driven delays, the approved basin-opening project remains in the interest of Northerners and Canadians. The original approvals gave Mackenzie Delta gas an opportunity to compete. An extension of the Sunset Clause to 2022 will maintain that opportunity.”

The extra time is needed not only to see the outcome of campaigns to siphon off North America-wide gas surpluses with a host of proposed LNG export schemes. The MGP also has to assess just how competitive it remains.

By the time the arctic scheme received NEB approval in late 2010 after a six-year regulatory ordeal, forecast costs doubled to C$16.2 billion (US$12 billion). A 2013 update, done in the midst of inflationary pressures driven by mammoth Alberta oil sands projects, raised the figure to C$20 billion (US$15 billion) or more (see Daily GPI, Dec. 27, 2013).

“Firm commitments to multiple LNG projects will be required to support a recovery in natural gas prices,” Imperial said.

“When natural gas markets recover, and a decision is made to proceed, the MGP proponents would require approximately four years for pre-construction activities including fiscal framework discussions [with national and regional governments], detailed engineering and extensive permitting [by territorial and native authorities]. As a result, 2022 is expected to be the earliest possible construction start.”

Inuvialuit supporters call the MGP worth keeping alive as “a precedent-setting project as it is the first in Canada — and perhaps globally — where aboriginal people have significant ownership and meaningful participation.”

The Gwich’in agree, “The MGP is an important project for the Northwest Territories and Canada as a whole, bringing with it significant benefits and an opportunity for a strong future.”

The territorial premier, in a letter encouraging the MGP sunset clause extension, said “the proponents have much to gain and nothing to lose by continuing to hold the CPCN [certificate of public convenience and necessity].”

McLeod said MGP production, as a northwestern resource, is a candidate to share directly in industry gains if LNG terminal plans advance into construction on the northern Pacific Coast of British Columbia.

“I am aware that the project proponents are looking into options for the MGP including the possibility of Mackenzie Gas as a supply source for proposed LNG export facilities on Canada’s west coast, which we as a government would also support,” said the territorial premier.