The lack of clarity on the duration of a production disruption in the Northeast continued to cause some fireworks in the natural gas futures market on Friday. Despite early weakness stemming from cooler weather forecasts ahead of the Independence Day holiday weekend, the August Nymex futures contract climbed another 3.9 cents to settle at $3.700. The September contract edged up 3.6 cents to $3.668. 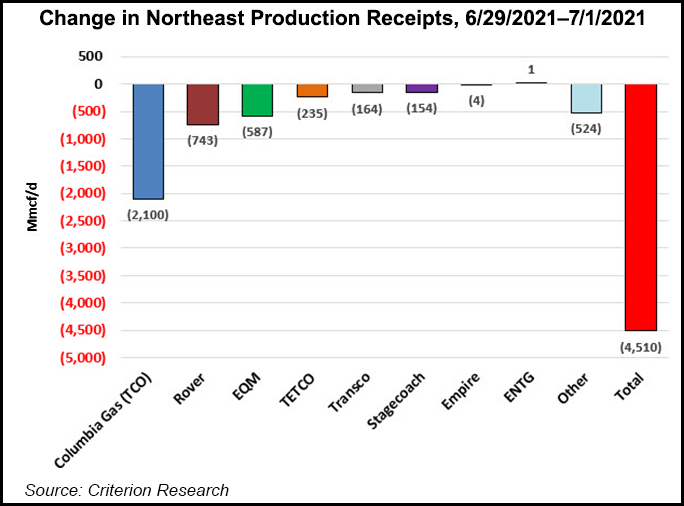 Spot gas prices, which traded for delivery through Tuesday, fell for a third day at the majority of North American pricing hubs. Cooler weather in some regions, a tropical threat for the Gulf of Mexico (GOM) and the typical lag in holiday demand combined to send NGI’s Spot Gas National Avg. down 4.5 cents to $3.370.

Friday’s price action along the Nymex futures curve capped off one of the most volatile weeks in recent history. The August contract fell early as the American and European weather models lost a decent chunk of projected demand. The contract sank to an intraday low of $3.598, but climbed from there.

Bespoke Weather Services said the weather model shift was a “much more material change” than recent modest revisions and moves the 15-day pattern back to near 10-year normal levels. This isn’t “wildly bearish,” according to the forecaster, but is a noteworthy step change.

“The changes come thanks to more cooling into the eastern half of the nation, as models have simply been too fast on bringing any real heat back, instead, now keeping the best heat (again) focused out West,” Bespoke said.

The forecaster noted that the market also has to remain cognizant of tropical activity.

What was once Tropical Storm Elsa strengthened to hurricane status as it moved into the eastern Caribbean on Friday. In its 1 p.m. ET update, the National Hurricane Center (NHC) said Elsa was moving toward the west-northwest near 29 mph. This motion was expected to continue during the next couple of days, with some decrease in forward speed.

On the forecast track, the storm would approach Jamaica and portions of eastern Cuba by Sunday, and move near portions of central and western Cuba by early Monday, according to the NHC. Although still several days out from a potential landfall in the United States, the storm could eventually reach the eastern Gulf of Mexico (GOM)/western Florida coast.

“This system has the potential to bring rain and cooling to the southern U.S.,” said NatGasWeather.

The firm noted that heavy rains associated with the storm also could delay liquefied natural gas (LNG) cargoes. However, any decline in feed gas demand to U.S. terminals could be offset by weaker production in the GOM. Onshore production, meanwhile, was sitting at around 87 Bcf early Friday, ahead of any revisions to the data.

With the steep drop in production in the Northeast still weighing heavily on traders’ minds, a few details started to trickle into the market.

EBW Analytics Group said the decline in output was triggered by the detection of a leak on MarkWest Energy Partners LP’s natural gas liquids pipeline near its Majorsville, WV, natural gas processing plant. In response, MarkWest quickly shut down the pipeline and curtailed operations at the Majorsville (1.3 Bcf/d), Sherwood (2.0 Bcf/d) and Mobley (0.9 Bcf/d) natural gas processing plants, with an aggregate capacity of 4.2 Bcf/d.

The MarkWest outages have hit gas flows out of Northeast hard, curtailing flows on a trio of natural gas pipelines, most notably Columbia Gas Transmission. The impact of the outages has been exacerbated by a decline in South Central production, according to EBW. Lower Canadian imports because of ongoing heat and the ongoing reduction in flows on Texas Eastern Transmission’s 30-inch diameter line also are wreaking havoc.

“With production in the Northeast running more than 3.5 Bcf/d below previous levels, the near-term price trajectory for natural gas depends heavily on the duration of the outages,” EBW said.

If MarkWest is able to restore service on the pipeline and restart its processing plants quickly, natural gas prices are likely to retreat, according to the firm. “With several Bcf/d of production being lost daily, however, an extended shutdown could fundamentally change the tenor of the market, with prices quickly racing higher.”

Meanwhile, the market continued to digest the latest storage data, though it had little to no bearing on prices Friday.

The Energy Information Administration (EIA) reported a 76 Bcf injection for the week ending June 25, larger than the average of major surveys and above historical builds for the similar period. Wood Mackenzie natural gas analyst Eric Fell said the injection appeared “neutral/normal” versus the prior five-year average compared to degree days and normal seasonality. Both the weekly injection and degree day total actualized close to the five-year average for the week, he said.

The analyst pointed out that the latest EIA figure is 22 Bcf larger than the prior week’s stat despite very little change in overall degree days. The week/week decline in gas generation was driven by a rebound in nuke/renewables versus the prior period, which had actualized below the five-year average for only the second time this year.

Bespoke said while intraday price action can be a head-scratcher, it remains difficult to argue much against the overall bullish backdrop. Until the supply/demand balance loosens at least back to the five-year average, higher prices remain quite possible moving forward as inventories are on pace for a “rather low” end-of-season storage level.

“The weaker weather is a point for bears, but most folks run five- or 10-year normal in storage models beyond day 15, anyway, so we need additional cooling to shift weather more decidedly into the ‘bearish’ bucket,” Bespoke said.

Cooler weather also was expected in parts of the country, driving small losses across the county’s midsection, throughout the Rockies and in California.

Losses throughout the Midwest and Midcontinent were in the single-digits, while several locations in Texas posted sharper declines ahead of a soggy holiday weekend. Katy dropped 11.0 cents to $3.500 for the four-day trading period. Waha was down 12.0 cents to $3.350.

East Coast markets, meanwhile, staged a rebound on Friday. Although the region was in store for some cooler weather to celebrate the Fourth of July, NatGasWeather said hot weather was set to return quickly.

Temperatures were forecast to climb back into the 80s to lower 90s across the East, boosting demand. The steamy outlook sent Algonquin Citygate cash up 12.5 cents to $2.885 for the four-day gas period.