Henry Hub spot natural gas prices are sitting under $1.50/MMBtu, but lower production is expected to drive a more than $2 rebound by February/March, assuming normal weather, according to IHS Markit. 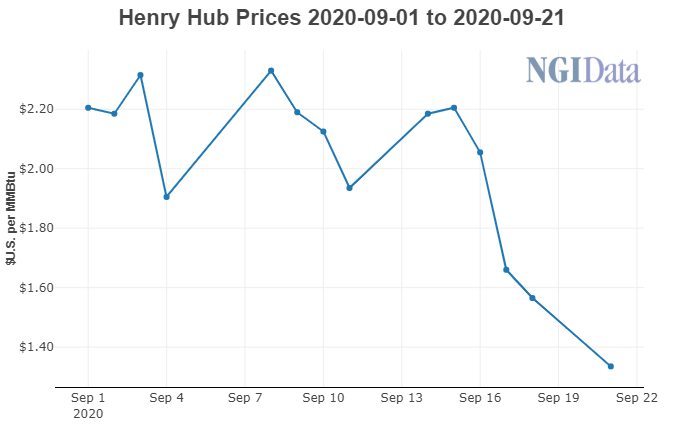 IHS Markit analysts expect the tightening supply/demand balance to lift Henry Hub cash prices to the $2.50 range by year’s end, up from an average near $1.80 in September/October, and to around $3.40 by February/March. This compares to the firm’s $1.87 forecast for full year 2020 and is on par with the Energy Information Administration’s (EIA) most recent Henry Hub price outlook. Moody’s Investor Service also credited lower production for a projected rise in prices this winter.

The last time February/March prices were sustained above $3.00 was in 2014, according to the EIA. The last month at any time of year with prices in that range was December 2018.

“With oil and gas producers pulling back due to the recession and low oil prices, gas production has fallen, and prices have gained as a result,” IHS Markit said.

IHS Markit analysts expect 2020 production volumes to be about 9 Bcf/d lower year/year in December 2020, with those volumes recovering only by about 2 Bcf/d in 2021. The EIA shows U.S. dry gas production hitting a record 96.4 Bcf/d in November.

Lower production has not only changed the broad supply/demand picture, but also the focus on where incremental gas is coming from, and therefore how prices signal to producers, according to IHS Markit.

This is no small feat for a group of producers with strained balance sheets, said IHS Markit, and for those outside the Marcellus/Utica/Haynesville, where there is an “orientation toward harvest rather than growth.

For the second time this year, Appalachia producer EQT Corp. shut-in natural gas production in response to weak prices. The firm in May curtailed 1.4 Bcfe/d but brought those volumes back online by July. Other operators have continued curtailments.

By spring 2021, IHS Markit sees the Haynesville dry gas play showing production gains, followed later in the year by Appalachia’s producers, which is expected to be aided by the added takeaway capacity from the Mountain Valley Pipeline.

On the demand side, winter 2020/21 is projected to be “basically flat” compared to last winter, according to IHS Markit, with liquefied natural gas exports and higher domestic power sector loads being offset by weaker commercial and industrial demand because of Covid-19.

EIA said Monday that U.S. natural gas demand from the industrial sector measured 20.1 Bcf/d in June, down nearly 1.0 Bcf/d compared to year-ago levels and down from 25.4 Bcf/d in January 2020. In its most recent Short-Term Energy Outlook, EIA projected a 4.4% decline in U.S. industrial natural gas consumption in 2020, with consumption expected to then grow 1.1% in 2021.

IHS Markit analysts see the potential for greater upside to demand if the weather is colder than normal, but said there are other factors that may keep some downward pressure on gas prices this winter and next year. Demand in the power markets is price sensitive, analysts said, with fuel switching still an option in some parts of the country if gas prices rise too much. Furthermore, U.S. gas inventories are “healthy” right now, even though storage injections this summer are on track to be about 3 Bcf/d lower than a year ago. IHS Markit is forecasting inventories to start the winter demand season at about 4 Tcf, which is above 2017, 2018 and 2019 levels and the second-highest on record.