U.S. onshore plays are set to increase both natural gas and oil output from January to February, with the gains set to follow a further drawdown in drilled but uncompleted (DUC) wells to close out 2021, according to updated modeling from the Energy Information Administration (EIA). 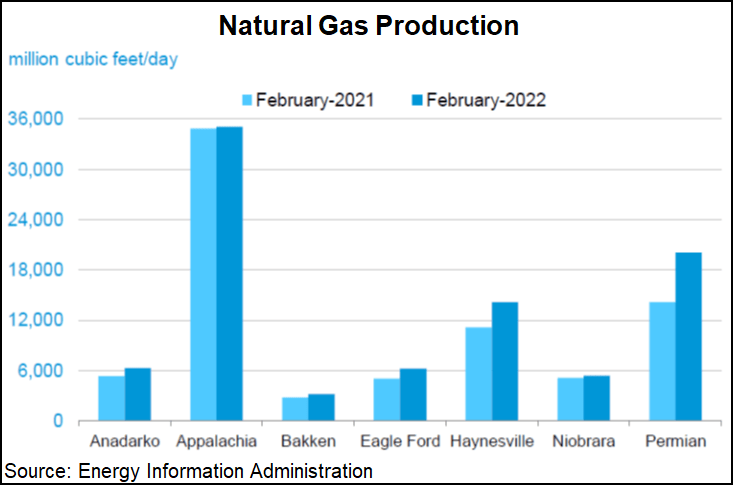 Natural gas production from seven key U.S. producing regions — the Anadarko, Appalachian and Permian basins, Bakken, Eagle Ford and Haynesville shales, as well as the Niobrara formation – is set to rise to 90.215 Bcf/d in February, up from estimated output of 89.828 Bcf/d in January, EIA said in its latest Drilling Productivity Report (DPR).

The Haynesville (up 127 MMcf/d) and the Permian (up 122 MMcf/d) are projected to lead the month/month production growth among the seven plays, with Appalachia contributing an incremental 81 MMcf/d and the Eagle Ford chipping in 65 MMcf/d. Only the Anadarko (down an estimated 23 MMcf/d) is projected to see declining gas output from January to February.

Meanwhile, oil production among the seven plays is set to rise 104,000 b/d sequentially to 8.54 million b/d in February, according to the latest DPR. Perhaps unsurprisingly, the Permian will contribute the lion’s share of the growth under EIA’s projections, raising output by 80,000 b/d month/month.

Operators in the seven plays depleted a combined 214 DUC wells from November to December, according to EIA. That’s in line with the drawdown rate reported a month earlier, when the DUC count fell by 226 units from October to November.

Each of the seven regions tracked in the DPR drew down their respective DUC totals to end 2021. The Permian saw its DUC count drop 91 units to 1,446 from November to December. DUC inventories were also depleted in the Eagle Ford (down 36), Bakken (down 27), Appalachia (down 27), Anadarko (down 14), Niobrara (down 11) and Haynesville (down eight) regions.