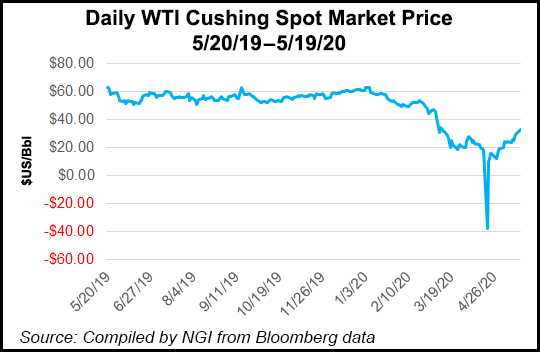 The WTI contract for June delivery added 68 cents to settle at $32.50/bbl on Tuesday, the contract’s expiry date. Oil gained $2.39 to settle at $31.82 on Monday, the first time since March 6 that the front month contract had settled above $30.

The rally of sorts is a far cry from a month ago, when May WTI plunged into negative territory as traders scrambled to unload the contract before the rollover date. The frenzied sell-off followed a lack of available storage capacity at the Cushing hub in Oklahoma for physical deliveries amid a collapse in demand caused by Covid-19 mitigation efforts.

Genscape Inc. natural gas analyst Josh Garcia said Monday this week’s price action “reflects the signs of the market rebalancing.” He cited a slight uptick in oil demand, the roughly 10 million b/d of production cuts by the Organization for the Petroleum Exporting Countries and allies, aka OPEC-plus. Garcia also pointed to a ninth consecutive weekly drop in the U.S. rig count and the first weekly drop in Cushing inventories since February.

With the most severe impacts of the pandemic on oil demand now “in the rearview mirror,” Raymond James & Associates Inc. analysts said Monday WTI should average $50/bbl in 2021; they set the long-term average at $65/bbl.

The analyst team led by John Freeman and Pavel Molchanov said in a note to clients the price recovery would be driven by a partial return of oil demand, combined with disciplined adherence by the Organization of the Petroleum Exporting Countries (OPEC) and its allies, aka OPEC-plus, to pledged production cuts, as well as organic supply cuts from countries outside the alliance.

Although current compliance to the OPEC-plus supply cuts appears to be above 100%, the Raymond James model assumes compliance of 75%.

“We estimate that the OPEC-plus contribution to rebalancing the market cancels out about one-third of Covid’s demand impact (on a full-year basis) in 2020,” the analysts said. “There is no way to avoid large amounts of price-related shut-ins in the second and third quarters, and even so, we forecast 2020 global inventories increasing by 4.4 million b/d, equating to a staggering 1.6 billion bbl for the year.”

The Raymond James price forecast is well above strip pricing, which currently indicates WTI near $30 at year-end 2020 and mid-$30s by year-end 2021, Freeman and Molchanov’s team said. They said at these prices, U.S. oil production would continue to fall nonstop at least through 2025.

“In real life, this cannot happen, since the outcome would ultimately be unsustainably steep inventory draws,” the analysts said.

EBW analysts cautioned, however, that, “In our view, the market is getting carried away with itself, rising too far too fast,” adding, “The economic shocks from the pandemic will keep global demand depressed for many months.”