An increasingly small percentage of oil and natural gas wells is supplying the majority of U.S. production, according to a new report from the Energy Information Administration (EIA) based on Enverus data. 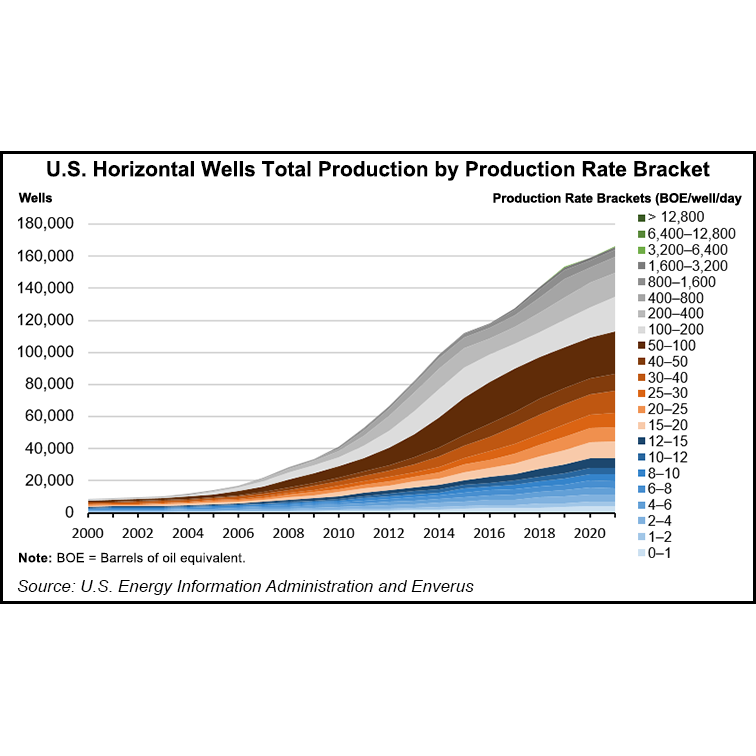 The trend is because of the proliferation of horizontal wells combined with hydraulic fracturing in the Lower 48, researchers said.

“Oil and natural gas wells drilled horizontally through hydrocarbon-bearing formations are among the most productive wells in the United States,” researchers said.

They added, “Horizontal drilling and hydraulic fracturing have greatly increased both oil and natural gas production rates of onshore wells in the United States.”

The EIA team noted that marginal wells nearing the end of their economically useful lives, aka stripper wells, produced about 7% of total U.S. oil and natural gas in 2021. The Internal Revenue Service defines a stripper well as one that produces 15 b/d or less of oil, or 90,000 cubic feet/d or less of natural gas, over a calendar year.

Horizontal wells are not without their challenges, however.

“The decline rates of hydraulically fractured horizontal wells within shale or tight formations are typically greater than for wells drilled vertically into conventional reservoirs,” the EIA team said.

In addition, the depletion of top-tier inventory is likely to make it harder for operators to improve well productivity, according to Enverus vice president Steve Diederichs.

“We don’t expect per-foot recoveries to improve as inventory in the best rock quality of most plays is beginning to deplete, and more and more activity pivots to secondary parts of plays both from a geographic view and stratigraphic view,” Diederichs told NGI. “Said another way, operators are drilling primary intervals in lower quality regions” and increasing the rate at which secondary intervals are drilled on a percentage basis.

He added that, “Longer laterals will help productivity on a per-well basis, but the rate of lengthening has slowed in many cases as basin averages reach about two miles.”

He said that Enverus expects well productivity on a per-foot basis to decline or stay flat at best over the coming years. He cited the lack of “any obvious technological improvement on the horizon like there was” from 2014 to 2021.