Led by growth out of the Haynesville Shale, natural gas production from seven key U.S. onshore regions is set to climb from November to December, according to updated projections from the Energy Information Administration (EIA). 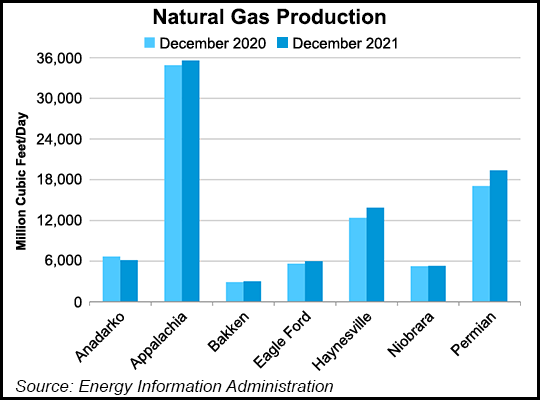 Total natural gas production from the Anadarko, Appalachia and Permian basins, as well as from the Bakken, Eagle Ford, Haynesville and Niobrara shales, will rise an estimated 226 MMcf/d month/month to reach 89.376 Bcf/d in December, the agency said in its latest monthly Drilling Productivity Report (DPR), published Monday.

EIA expects the largest monthly increase from the Haynesville at an estimated 111 MMcf/d, with Permian natural gas production projected to climb 87 MMcf/d for the period. Natural gas production gains are also expected for the Appalachia (up 7 MMcf/d), Bakken (up 8 MMcf/d), Eagle Ford (up 31 MMcf/d) and Niobrara (up 12 MMcf/d) regions.

The only one of the seven regions expected to see lower month/month gas output is the Anadarko, with production there projected to fall 30 MMcf/d from November to December, DPR data show.

Operators across the seven regions depleted their drilling backlogs to the tune of 222 drilled but uncompleted wells (DUC) from September to October, dropping the overall DUC tally to 5,104. Permian DUC totals fell 107 units to 1,705 for October to lead across-the-board declines in the U.S. onshore. The Anadarko (down 13), Appalachia (down 24), Bakken (down 29), Eagle Ford (down 35), Haynesville (down seven) and Niobrara (down seven) regions also posted declining DUC totals for the September-October period, according to the latest DPR data.