The U.S. oil and gas drilling rig count is steadily rising, but permitting activity is a bit more wobbly, as the Lower 48 recorded a double-digit monthly dip in May. 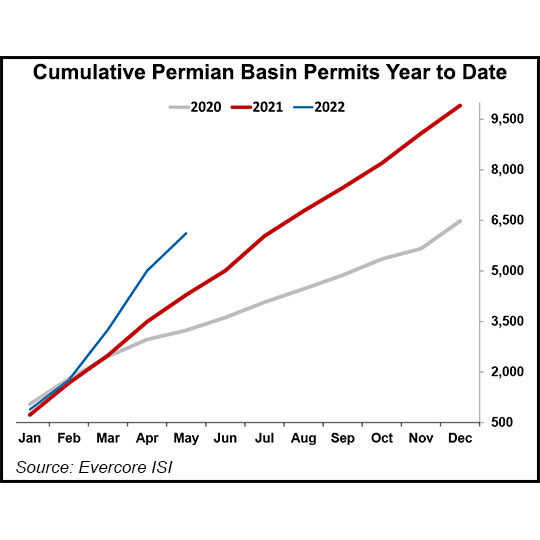 According to data compiled by Evercore ISI using state and federal information, Lower 48 permitting plunged by 17% in May, month/month (m/m). The Permian Basin led the decline, off 18%, or 332 fewer permits than in April.

The dip is not too worrisome, as May “has historically been lower than April regarding permitting activity, reporting an average 21% decrease over the last five years,” Evercore analyst James West said.

While overall permitting fell, the Permian is the most active basin, which means when permits slip, it affects the entire country. Gains in other basins were offset by “larger losses” in West Texas and southeastern New Mexico, West noted. There also was a decline in the Powder River Basin (PRB), down 39% or by 140 permits. The natural gas-rich Marcellus Shale saw 46% fewer permits in May, off by 111 permits.

Meanwhile, there were solid gains in some of the top U.S. basins.

The gassy Haynesville Shale recorded a 36% increase in permits in May m/m, up by 67, while the Eagle Ford Shale had a 7% gain, with 33 more permits. In the Bakken Shale, there was a 24% increase, or 16 more permits m/m.

“Permits in the Permian represented 42% of the total issued in the country, followed by Eagle Ford with a 15% share and the Powder River Basin with 6% of the total,” according to Evercore.

By state, “May marked an end for a growth streak in Texas permitting,” which was down by 10% m/m or 218 permits, West said. “The state had reported monthly increases in permitting since August and is currently 70% up on a year-to-date basis.”

Wyoming, home to the PRB, also reported a monthly decrease, off by 38% from April or 153 permits. New Mexico permitting declined by nearly one-third, or by 87 permits. Pennsylvania was down by 86%, or by 83.

There were a few “small increases” in Louisiana, with permitting up by 34% or 46 permits. North Dakota gained 16 more permits, which was 24% higher than in April.  Utah gained eight permits on the month, which was 26% higher.

Even as permitting has been up and sometimes down, the U.S. rig count has accelerated. As of last Friday (June 17), the domestic rig count climbed by seven units to 740, on a combination of gains in oil- and gas-directed drilling, according to the latest numbers from Baker Hughes Co.