Oil and natural gas permitting climbed in September from August by 26% and rose nearly 60% from a year ago, ending the third quarter on a positive note, according to Evercore ISI. 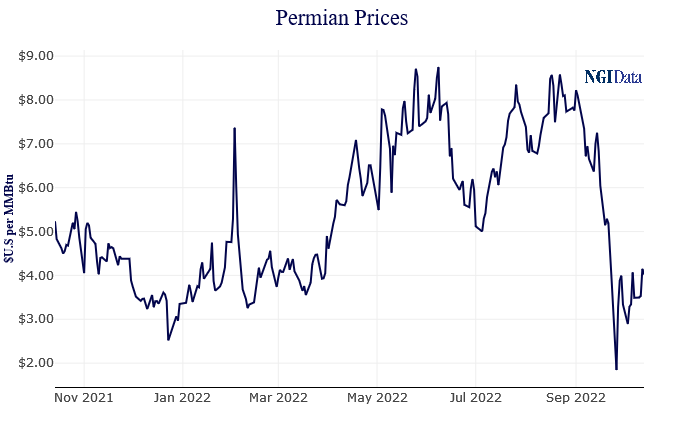 Analysts said there were 809 more requests to drill in September month/month (m/m). The Permian Basin led the way, rebounding by 47% from August, with 538 more requests.

Evercore compiles the monthly report using state and federal data. Permits are pulled for onshore drilling often only a few weeks before rigs are raised, while offshore rigs may not go up for several months after permits are requested.

A slowdown in the Gulf of Mexico led to a three-rig decline to 762 in the United States for the week ending last Friday (Oct. 7). The active U.S. rigs were up from 533 rigs running in the year-earlier period, according to the latest tally by Baker Hughes Co., which is partly based on Enverus data.

Permitting gains last month were driven by the Permian, with 1,676 permits, according to Evercore. The Haynesville Shale was second, up 106% m/m with 112 more. Requests to drill in the Barnett Shale rose by 108% from a month earlier, or by 69, followed by the Eagle Ford Shale, 14% higher with 59 more requests. The Mississippian Lime also gained, recording an 18% increase m/m with 39 more permits.

“The Permian represented 43% of the total issued permits over the month, up from August’s 37% share,” according to Evercore. “The Eagle Ford was the basin with the second largest count share with 12%, followed by the Mississippian with 7% and the Marcellus with 6%.”

Other notable state increases were reported in New Mexico, up by 115 permits, or 55% higher m/m. Kansas had 27 more permits, which was 18 more m/m, while California reported a gain of 25 permits, up by 14 from August.