U.S. liquids supply growth may struggle to grow more than 500,000 b/d a year as Lower 48 well productivity, particularly in the Permian Basin, declines, according to research by Raymond James & Associates Inc. 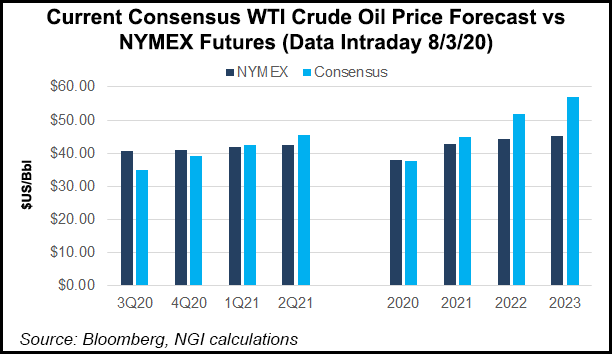 The analyst team led by Marshall Adkins on Monday said its current base case production forecast for the United States assumes 10% well productivity gains in 2019 and 5%/year in perpetuity. The base case also assumed higher oil prices, rig and well counts in the coming years. The U.S. drilling activity is forecast based on what would likely occur at current five-year oil futures strip pricing.

“Given that consensus expectations for U.S. oil supply growth in 2020 are closer to 1.5 million b/d, our estimate of only 350,000 b/d of 2020 U.S. growth is way below consensus and very bullish for oil prices next year,” the analysts said.

Meanwhile, liquids supply growth outside the United States is forecast to be limited over the next five years.

“Should U.S well productivity flatten out and global demand growth average even just half of the 2010-2018 average, U.S supply growth would still fall short way short of balancing the oil market at $50/bbl,” the Raymond James team said. “All the signs are pointing toward a decline in U.S well productivity, which is very bullish for oil prices.”

Beyond the “supply gyrations” of the Organization of the Petroleum Exporting Countries and its allies, the single most important driver of the oil market in the next decade is going to be the trends in U.S. well productivity, according to Raymond James.

The Lower 48 has made wild gains in oil output with the advent of horizontal drilling, but domestic productivity “has actually slowed to mid-teens growth rates in recent years.”
The Raymond James analysis of monthly production data in 2020 to date indicates a sharp deterioration in domestic well productivity growth.

The decline is attributed in part to stagnant horizontal lateral lengths, sand volumes and fracture stages. In addition, “pressure drawdown consequences from parent-child interference and reservoir communication damage from the ‘bigger hammer’ approach appear to not only be significant headwinds for productivity growth, but actually provide a solid case for future U.S. well productivity declines.”

Meanwhile, as operators venture beyond the core acreage, it is likely there will be more negative impacts on domestic well productivity.

operators eventually venture further away from “core” acreage and into less productive rock, it’s likely that will have negative effects on U.S. productivity as well.

As to what this could mean to U.S. production, the Raymond James analysts said there likely will be “way below consensus U.S. oil supply growth at current oil prices and activity levels over the next several years…That tells us that U.S. oil prices need to move substantially higher than today’s $50/bbl levels.”

There was a slight uptick in well productivity during 2019, up 15% from 2018, but it was a one-off, according to the analysts, because the deep-pocketed operators accelerated Permian Basin activity and adopted refined drilling techniques.

“With productivity growth slowing to 11% in 2017 and the assumption that 2018 was likely an anomaly, we entered the year modeling a 10% productivity increase for 2019. After seeing actual Lower 48 production undershoot our model for the first half of this year, our initial 2019 well productivity assumption of a 10% increase now appears way too optimistic.”

In a warning for the biggest Lower 48 play of all, the Raymond James analysts said the IP-90 rates in the Permian basin appeared “especially dire.” The story is similar in other Lower 48 plays, “except with even more pronounced deterioration.”

“On a sequential quarterly basis, IP-90s in 1Q2019 were 6% lower than in 4Q2018 and a whopping 14% lower than 3Q2018,” analysts noted. “Given the Permian accounts for roughly half of all U.S. Lower 48 activity, it’s reasonable to assume that U.S. productivity growth will continue to trend in the same direction as the Permian. Should Permian productivity be topping out, the U.S. Lower 48 likely follows.”