On the strength of increased onshore oil and natural gas drilling activity, the U.S. rig count advanced six units to 610 for the week ended Friday (Jan. 28), according to the latest tally from Baker Hughes Co. (BKR). 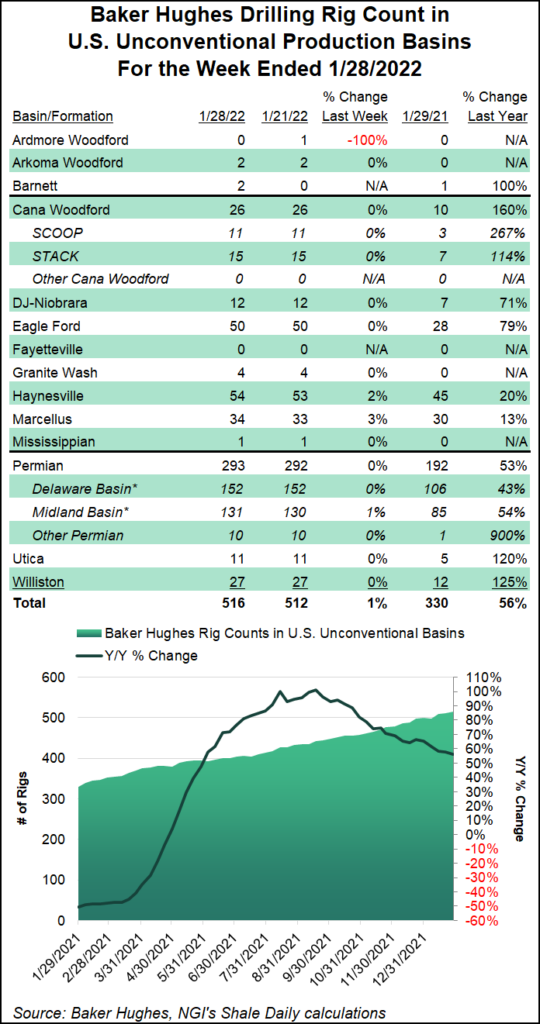 Including gains of four oil-directed rigs and two natural gas-directed units, the combined domestic count ended the period 226 units ahead of its year-earlier total of 384. All of the week’s gains occurred on land, while the Gulf of Mexico count held steady at 18, according to the BKR numbers, which are partly based on data from Enverus.

Nine horizontal units were added overall in the United States for the week, offsetting declines of two vertical units and one directional unit.

The Canadian rig count climbed five units for the week to end at 217, up from 174 in the year-ago period. Gains there included four natural gas-directed rigs and one oil-directed unit.

Broken down by major basin, two rigs went to work in the Barnett Shale, up from zero active rigs a week earlier, according to BKR. The Haynesville and Marcellus shales each added one rig week/week, as did the Permian Basin. The Ardmore Woodford, meanwhile, saw its lone active rig exit during the period.

By state, Texas led with a net increase of four rigs, while Louisiana, Oklahoma and Pennsylvania each added one rig to their respective totals. New Mexico saw a net decline of one rig, the BKR data show.

Demand hit 22.4 million b/d for the period ended Jan. 21, representing a 2.3% week/week increase. The overall gain stemmed largely from a 3.4% increase in gasoline consumption and a 4.3% jump in distillate fuels, which include diesel, EIA said.

For the same period, U.S. crude oil production edged slightly downward by about 100,000 b/d to 11.6 million b/d. Domestic production remains more than 1 million b/d below pre-pandemic highs, according to the agency.