Having already plunged by 62% year/year (y/y) in the first three months of 2020, permitting for Lower 48 oil and natural gas drilling is expected to drop further in April, according to a team of Evercore ISI analysts led by James West. 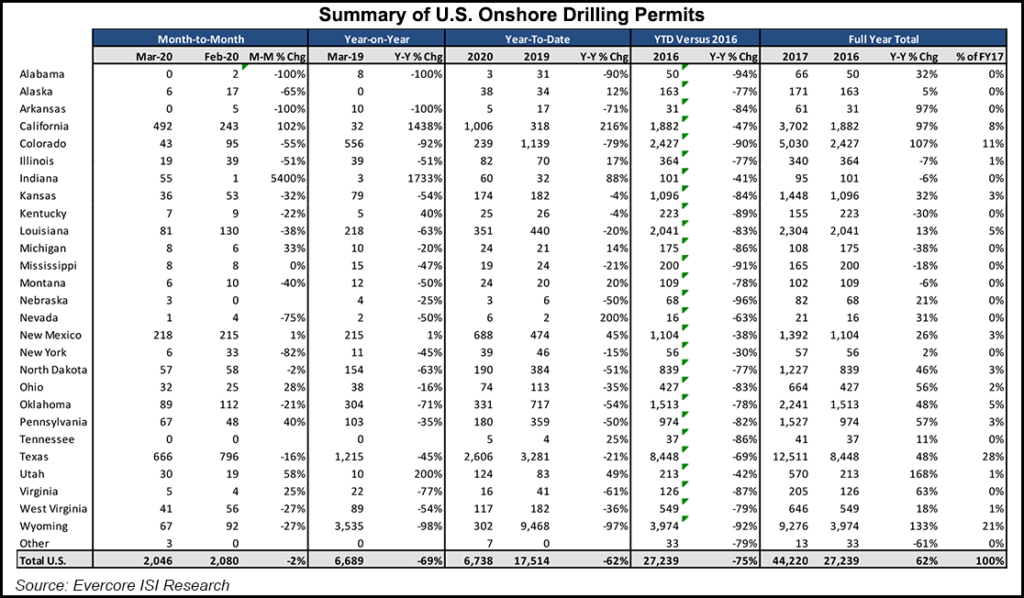 Permit submissions for oil drilling in the Permian Basin and Eagle Ford Shale dropped by 26% and 23% respectively for the week ended April 10 compared with the previous week, the Evercore team said in their latest tally, which was released Wednesday. That equated to 140 permits in the Permian and 27 permits in the Eagle Ford. Nonetheless, total permitting activity in oil formations actually rose 4% as permitting in other shale plays remained strong, analysts said.

Permits for natural gas drilling fell by 53% week/week, driven by a 61% decline in the Marcellus Shale to 12 permits, according to analysts, who said, “We expect permitting to collapse in April.”

The projection follows a forecast by the International Energy Agency that global oil demand will drop by a staggering 9.3 million b/d this year amid unprecedented demand destruction wrought by the Covid-19 pandemic.

For the first quarter of 2020, the Rockies and Northeast regions drove steep declines in permit submissions for oil and gas formations, the Evercore team said.

Permit submissions for oil-directed drilling fell by 63%, analysts said, led by sharp declines of 85% in the Denver-Julesburg (DJ)/Niobrara and 97% in the Powder River basin.

The DJ straddles Colorado and Wyoming, while the Powder River covers Northeast Wyoming and Southeast Montana.

Total Wyoming drilling permits totaled 67 in March, down from 3,535 in the same month a year ago, while Colorado permits fell to 43 from 556.

California was an outlier, with permits skyrocketing to 492 from 32 in the year-ago month.

Permitting in natural gas formations fell 36% to 714 for the quarter, West’s team said, driven by a 43% decline in the Marcellus shale to 251 permits, partially offset by a 21% increase in the Haynesville Shale.

Respective declines of 12% and 18% in the Permian and Eagle Ford were partially offset by stronger activity in other shale plays, where permitting was up 76%, West’s team said.

However, the relative month on month stability belies the steep y/y decline for the quarter, analysts said, “as the onshore permitting collapse is only 20% above the 2016 low.”

Rig count data published Friday by Baker Hughes Co. appeared to support Evercore’s prediction of a steeper plunge in April, with the oil rig count dropping to 438 this week from 504 the previous week, a 13% decline. The natural gas rig count shed seven to land at 89.