Natural gas venting and flaring in the United States reached an all-time high of 1.48 Bcf/d in 2019, with North Dakota and Texas accounting for 85% of the total, the Energy Information Administration (EIA) said Tuesday. 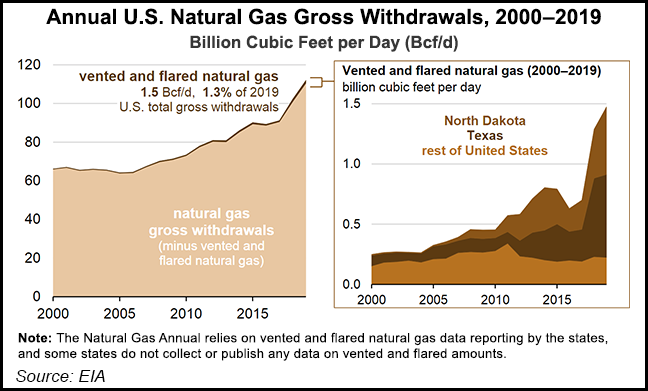 “As crude oil production has outpaced the construction of necessary infrastructure to transport the natural gas extracted during oil production, or associated natural gas, it has been increasingly vented and flared,” the EIA team said.

“State agencies in Texas and North Dakota are working with oil producers to limit the need for flaring without shutting down or affecting crude oil production from new wells,” researchers said, noting that venting is banned in North Dakota and restricted in Texas.

The lack of natural gas takeaway capacity is especially acute in North Dakota, where the percentage of total natural gas withdrawals that was flared rose from 17% in 2018 to 19% in 2019, the highest percentage of any state, according to EIA.

Researchers noted that natural gas production in the Bakken Shale rose from 0.2 Bcf/d in 2010 to nearly 2.9 Bcf/d in 2019. However, gas processing and pipeline capacity have lagged far behind.

Although the volume was up year/year, the percentage of flared/vented gross withdrawals was down from 2.6% in 2018, researchers said.

Texas regulators in November adopted rules requiring producers to justify why they need permission to vent and flare gas, although environmental groups have argued for more stringent measures.

A study by the Environmental Defense Fund found recently that more than one in 10 flares in the Permian Basin were either unlit and venting uncombusted methane, or were only partially burning the gas released.

Amid growing pressure from investors for improved performance on environmental, social and governance metrics, producers also are self-imposing more ambitious goals to curb venting and flaring.

Permian heavyweight Pioneer Natural Resources Co., for example, has formally adopted targets to limit flaring intensity to less than 1% of gas produced by 2022, and to end routine flaring altogether by 2030.

Colorado, meanwhile, became the first Lower 48 state to ban routine flaring last month, part of a larger mission change at the Colorado Oil and Gas Conservation Commission from “fostering” to “regulating” the industry.

New Mexico, for its part, is targeting 98% natural gas capture from the oil and gas industry by end-2026 through two sets of draft regulations aimed at curbing emissions of methane and volatile organic compounds.