Lower 48 natural gas production is expected to increase month/month in October in almost every major basin, with oil output set to climb in most regions too, federal researchers said Monday. 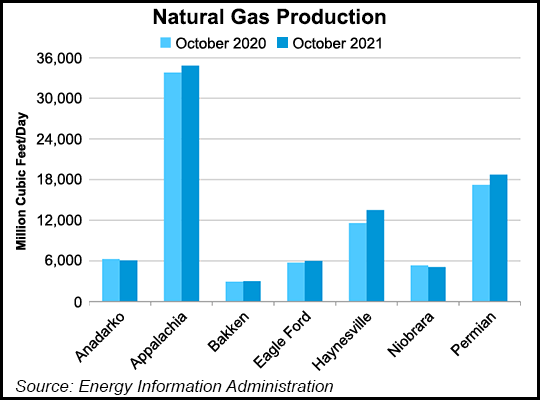 The Drilling Productivity Report (DPR), compiled every month by the Energy Information Administration, indicated that gas production is predicted to increase in October from September in six of the seven major onshore basins.

The DPR estimates gas and oil gains for the Anadarko, Appalachia, Haynesville and Permian basins, along with the Bakken and Eagle Ford shales and the Niobrara formation.

Overall, gas output is forecast to increase in October from September across the Lower 48 by 219 MMcf/d to average 87.34 Bcf/d, EIA researchers said.

Only Anadarko Basin gas production is seen falling month/month, down by 37 MMcf/d to 6.10 Bcf/d.

The Permian is expected to be responsible for most of the oil gains month/month, with output rising by 53,000 b/d to 4.826 million b/d.

Anadarko also is the only basin predicted to see lower oil output from September, with an average of 367,000 b/d, down by 2,000 b/d from September.

The drilled but uncompleted well count, aka DUCs, were down in every region in August from July. The total declined by 248 to end at 5,713, researchers said.

Operators also brought down the DUC count in Appalachia, completing 16 more wells to end at 547 in August. There also were nine DUCs finished in the Niobrara, with 371 still awaiting completion. There also were four wells completed in the Haynesville during August, bringing its DUC count down to 371.