EQT Corp., which on Thursday reported a larger year/year loss for the third quarter, said that it expects a pair of 2021 deals to lower its firm gas transportation costs by about 5 cents/Mcfe going forward. 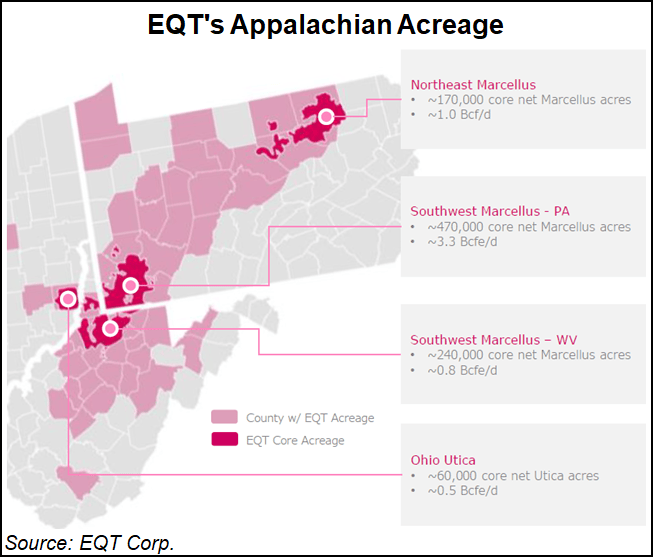 In one deal, EQT reached an agreement to sell down up to 525 million Dth/d firm transportation capacity on its Mountain Valley Pipeline to an undisclosed entity, while retaining Southeast market access.

The second transaction would allow EQT to increase gas deliveries to Rockies and Midwest markets via a new firm capacity deal on the Rockies Express Pipeline (REX).

The nation’s largest U.S. natural gas producer attributed the 3Q2021 loss to a one-time charge related to hedging. In other words, EQT made a bad bet on the direction of natural gas prices during the quarter. Other quarterly losses included depreciation and depletion increases, along with higher transportation and processing expenses.

“Our reasons for hedging 2022 production at the levels we did while continuing to keep 2023 exposure open is simple,” said CEO Toby Z. Rice. “We believe that regaining our investment grade rating and reducing absolute debt levels best positions EQT shareholders to fully capture the thematic long-term tailwinds in the commodity.”

The Pittsburgh-based independent is not alone in reporting a missed hedging opportunity for the third quarter. Royal Dutch Shell plc also revealed that it had been stung during the period by a hedging strategy with limited spot gas market exposure.

EQT’s executive team had also faced scrutiny over its hedging strategy in July.

“In 2022, our preliminary estimates are $1.9 billion with 65% of our gas hedged,” said Rice. “As our hedges roll off in 2023, we see free cash flow (FCF) generation potential growing even further to approximately $2.6 billion…” That would equate to about a 30% FCF yield, “for a company that expects to be investment-grade, highlighting how robust the FCF generation is from our business.”

“Since we last reported in July, we’ve seen a fundamental shift in the natural gas market,” said Rice. “Current world events demonstrate the critical importance that natural gas will play in our energy future.

“Natural gas futures for 2022 to 2026 have rallied approximately 75 cents, which is translated to a meaningful increase to our near-term free cash flow projections.”

For the third quarter, total operating costs were $1.25/Mcfe, with a year-to-date well cost of $680/lateral foot in the southwestern portion of the Marcellus in Pennsylvania. It also had $297 million in capital expenditures, up $49 million year/year, as well as $99 million in FCF, which was up $52 million. In addition, EQT had $48 million in net cash from operating activities, which was down $136 million year/year.

EQT expects $5.6 billion in FCF through 2023, with FCF topping $10 billion between 2021 and 2026. The positive outlook was attributed to improving commodity prices, along with other factors such as credit upgrades, lower capital costs and operational improvements.

CFO David Khani said the company has also taken steps to improve its hedging position — and capture stronger pricing in 2022 — by purchasing “a significant number of winter call options at very attractive prices and strike options that are in the money.”

“For our 2023 hedge book, which sits at under 15%, we expect to hedge with a more balanced and opportunistic approach as we have reduced debt and achieved our investment-grade metrics in 2022,” said Khani.

“At a high level, we envision a lower hedge percentage utilizing structures that enable upside participation to capture our anticipated long-term appreciation of natural gas prices and increased volatility.”