Exploration and production (E&P) companies working in the Lower 48 have witnessed an evolution in how their executive teams are compensated, with returns and free cash flow (FCF) now trumping volumes and growth, according to an analysis by Raymond James & Associates Inc. 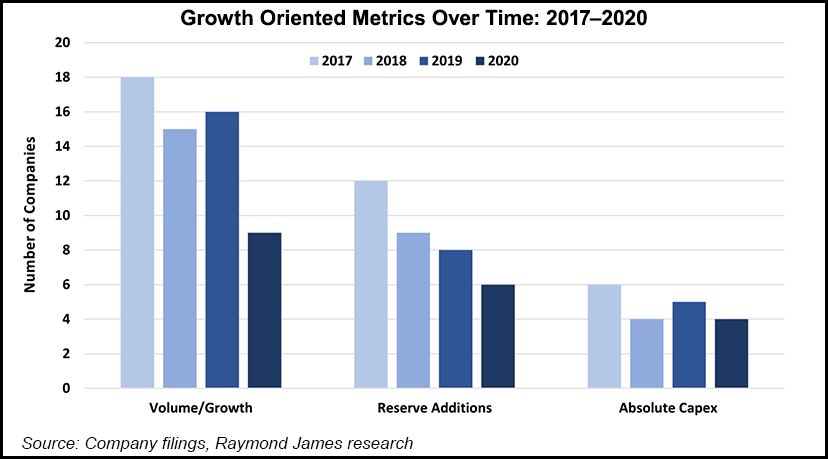 Nearly all, or 90% of the E&Ps covered by the analyst firm also are using environmental, social and governance (ESG) performance metrics to determine annual bonuses.

“This further underscores the E&P industry’s commitment to sustainability,” said analysts John Freeman and Harry Halbach in the firm’s latest Stat of the Week.

Say on pay was mandated under the 2010 Dodd-Frank Wall Street Reform and Consumer Protection Act. The nonbinding shareholder resolution by company management asks investors to approve the compensation packages for the named executive officers. Even though it is nonbinding, the impact has been wide.

Only SM Energy Co. had a metric in its long-term incentive plan (LTIP) “specifically targeted at ESG. We anticipate other companies following suit in the coming years.”

About one-half of the E&Ps that used relative total shareholder return (TSR) as a metric for LTIP capped their payrolls at 50% or they “saw a payout reduction if absolute TSR was negative,” the analysts noted.

In August 2019, Raymond James analysts had noted the beginnings of the E&P industry shift in short-term incentive compensation toward returns/FCF-driven metrics. The industry has since been transformed from one of  “growth for growth’s sake” to “one displaying superior capital discipline,” the analysts said.

“While talk can be cheap, E&P operators have put their money where their mouths are (literally), substantially decreasing executive compensation incentives linked to growth-related targets,” researchers said. Firms also are linking bonuses to return on capital employed/return on invested capital, FCF/yields and other value-adding goals.

The financial gains from ESG initiatives also are evolving into a “classic win-win scenario,” said the analysts. Water recycling, electric fracturing crews and other ESG initiatives have driven down lease operating expenses (LOE) by an estimated 20% since 2018.

Among the examples they noted, EOG Resources Corp. between 2019 and 2020 increased its wellhead gas capture rate to 99.6%, “equating to a further $6.9 million natural gas revenue for fiscal 2020.” The E&P also lowered its well costs around 7%, mainly using water reuse pipelines and facilities.

Also of note is Permian pure-play Diamondback Energy Inc., which increased its use of recycled water for completions from 2017 to 2019 while reducing freshwater barrel/boe by 75%, the analysts said. The producer also has achieved its short-term flared gas goal of less than 1% of all natural gas produced.