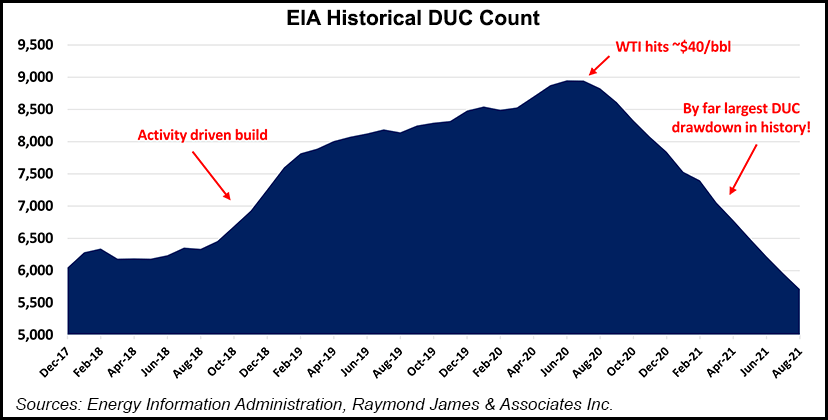 Analyst John Freeman in a note to clients Monday said the domestic count of drilled but uncompleted wells, aka DUCs, has dropped by nearly 3,300 from nearly 9,000 strong in July 2020.

In the “largest (and quickest) drawdown to date,” the current DUC inventory is crossing the critical “normal level,” Freeman said. “Over the last year, completions have outpaced new drills by nearly 250 wells/month, an unsustainable delta of which has never occurred.”

E&Ps since July 2020 have maintained production levels mostly “by tapping their vast supply of DUCs, opting to forego costlier new drills in favor of cheaper completions.”

For production levels to sustain current rates — not grow — there has to be “a substantial influx in rigs, and therefore new drills are needed,” he wrote. “Operators must devote additional capital toward new drills (soon) or risk a slow, but sure, decline in production.”

The U.S. Energy Information Administration (EIA) every month provides data on the DUC count across the Lower 48 in the Drilling Productivity Report. The DUC count for August was down in every region month/month, with the total declining by 248 to end at 5,713.

The count “has experienced Dr. Jekyll and Mr. Hyde-like fluctuations, both positive and negative,” Freeman said. “The EIA date can best be described as a towering, high-speed roller coaster, gradually climbing from August 2018 to June 2020 before plummeting in just 14 months time.”

However, “drilling activity has severely lagged completion activity,” Freeman noted. For E&Ps, the “thought process is simple.” Completing DUCs requires a “fraction” of the capital spending required to sustain production compared to drilling and completing more wells. That in turn has allowed E&Ps to maintain their capital discipline, grow their free cash flow and improve investor distributions.

“This, however, begs the question about sustainability,” Freeman said. “How long can E&Ps rely overwhelmingly on DUCs as a low-cost alternative to drilling new wells? To date, The EIA DUC count has decreased 34% in just 14 months while month/month DUC decline rates have remained unchanged since May.”

The lower rig count totals mesh with fewer DUCs, but that’s not the entire story, said the Raymond James analyst. In August the average rig total was 501, a roughly 100% increase year/year. The rig count last month, though, was only around one-half August 2019 levels.

However, the fracture (frack) spreads have risen 211% year/year and only lag 2019 levels by 36%, according to Raymond James data. That then makes it unsurprising to see completions outpacing new wells.

“Bottom line, we’ve never seen a drilled versus completed gap persist as long as it has in the past 12 months,” Freeman said.

Historically there  is a “normal state of DUC inventory required for E&Ps to optimize operations and lower overall well costs…The appropriate standard to judge the appropriate level of DUCs is ‘months of inventory’ or the amount of time completions could continue unheeded without additional wells being drilled.”

According to Raymond James data, over the past five years the “normal” level of DUC inventory has increased from around two-to-three months to a “new normal” of between six months and seven months.

The Permian Basin still controls most of the DUCs, ending at 2,119 in August, according to EIA’s latest DPR.

“While most will agree the Permian offers the lowest average breakeven prices for E&Ps, multi-year high commodity prices have brought renewed life to other basins,” Freeman said. “Since January, drilling activity has increased in all major DPR basins,” most notably in the Bakken Shale, up 95%, and the Niobrara formation, with activity 123% higher.