More than 45% of expected natural gas production in 2021 is hedged at a Henry Hub base price of $2.58/MMBtu, marginally lower than the 2020 price of $2.70, according to a Rystad Energy analysis of U.S. producers. 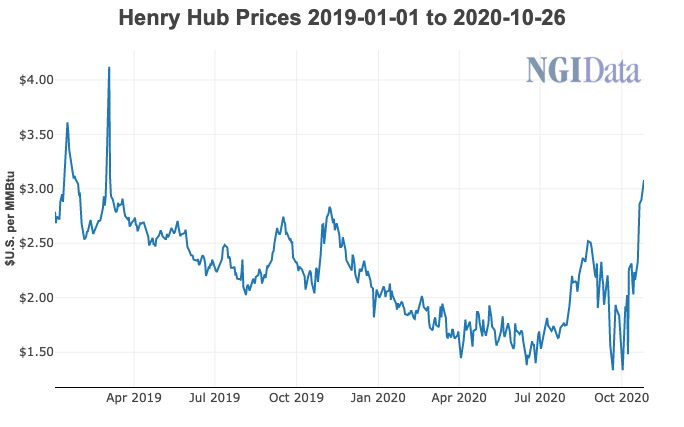 The analysis also determined exploration and production (E&P) companies have to date hedged 41% of forecast 2021 oil output at an average price of $42/bbl West Texas Intermediate (WTI), sharply below this year’s floor of $56.

“Hedging strategies of U.S. upstream operators have taken center stage as a tool that is helping companies cushion their cash flows amid weak oil prices,” analysts said. Of the oil-producing peer group that Rystad’s team analyzed, 20 E&Ps had “communicated their hedging volumes for 2021 as of early October,” accounting for nearly one-third of expected 2020 Lower 48 oil production.

“The share of three-way collars has dropped significantly since the spread of Covid-19, accounting only for 17% of the 2021 settlements compared to 41% in 2020,” said senior shale analyst Alisa Lukash. “This change comes as the collapse in the crude market in early 2020 meant that prices broke the subfloor of most of these contracts, generating only around $10 uplift to the pre-hedged realized price.”

According to the data, Occidental Petroleum Corp. sold “a large volume of call options for 2021 settlement, even though these contracts alone are not considered hedging contracts because they have no floor protection.” These contracts “provide a price ceiling at around $74/bbl Brent and can potentially be combined with the puts to create a collar or a three-way collar in the future, similar to the operator’s 2020 derivative strategy. That means the share of its 2021 three-way collars might still grow significantly in coming quarters.”

Permian Basin pure-plays Diamondback Energy Co., Laredo Petroleum Inc., Parsley Energy Co. and Pioneer Natural Resources Co. had hedged “a significant amount of their expected oil production against Brent,” Rystad analysts noted. The calculated floor in some cases was also an actual price/bbl in a swaps contract. The distribution of the hedged volumes is quite wide.”

Laredo, Parsley and SM Energy Co. had more than 60% of their forecast 2021 output protected, the data indicated. “Most others come in between 20% and 60%. Some of the “highly leveraged” E&Ps added hedges early this year to cover large volumes of expected output to take advantage of higher strip prices.

“Generally, the gas peer group is also well hedged, though there is still room for additional hedge positions to be layered on in 2021, especially given that this peer group hedged nearly 70% of its 2020 volumes,” analysts noted.

“Notable outliers” included Antero Resources Co., which had hedged most of its production for 2021, as it has for 2020, and at a higher floor price. On the other end was Appalachian rival Cabot Oil and Gas Corp., “which has historically maintained a low hedging profile,” and which remained unhedged for 2021.

“This perhaps also reflects bullish views on gas prices communicated by the management.”