The average price for U.S. onshore unconventional acreage has declined by more than 70% in the last two years, a precursor to more consolidation through 2022, according to Rystad Energy. 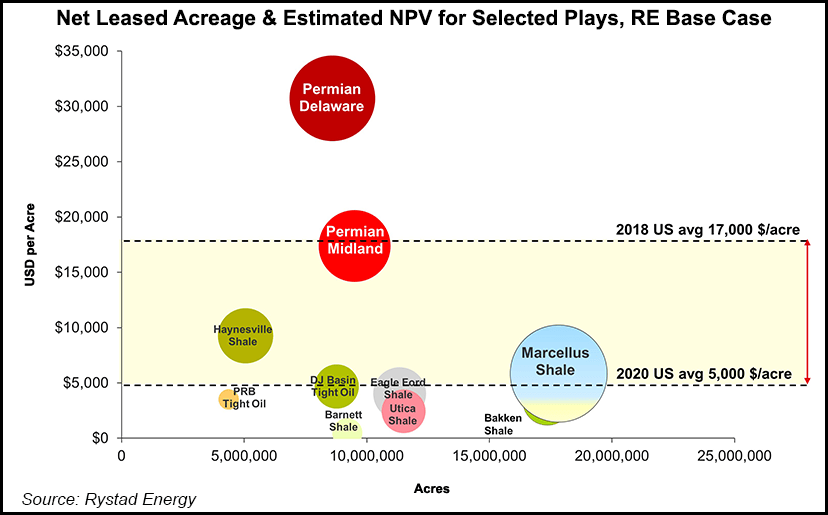 The price for Lower 48 acreage fell on average to $5,000/acre this year from $17,000 in 2018, the result of lower West Texas Intermediate (WTI) oil prices. That could lead to more tie-ups between rival exploration and production (E&P) companies.

“Fundamentally, tight oil and gas economics have improved significantly since 2018, yet the implied price strip in our new base case is substantially lower than it was in 2018,” Rystad analysts said. The lower strip price reduces a “large portion” of undeveloped net present value, or NPV, potential.

While overall acreage prices are down, the Permian Basin’s two big sub-basins lead the nation in terms of value. The Permian Delaware, which extends from West Texas into southeastern New Mexico, is fetching around $30,000/acre. Its twin formation, the Midland in West Texas, is garnering about $17,000/acre.

“Naturally, the multi-stacked potential of the play allows for simultaneous development of several zones from the same spacing unit, which in turn multiplies the surface acreage’s NPV potential,” said analysts.

“When it comes to the fundamental upstream asset value of specific leading public operators, we see a per-acre drop of close to $20,000 from the 2018 levels,” the Rystad team said. That represents “a 44% reduction in the two years, from $45,000/acre to $25,000/acre in 2020. Not surprisingly, operators with more diversified portfolios have a slightly lower NPV/acre compared to the pure Permian-focused producers.”

“The second factor that impacts acreage prices quite significantly is the proportion of surface acreage to the focused development acreage selected by an operator, a fundamental factor driving the NPV,” the analysts said. “In most cases, large acreage positions would have lower NPV/acre amid a higher share of less prospective Tier 3-4 units” over the top-tier acreage.

The Permian has seen a more “significant reduction” in valuations than other Lower 48 plays based on historical deal price comparisons.

“The most recent Permian-focused transactions attracted little to no acquisition premiums, with an average price of about $24,000/acre,” Rystad analysts noted. That’s off by 67% from the E&P dealmaking in 2018, led by the sale of RSP Permian Inc. to Concho Resources Inc. and the BP plc takeover of BHP’s onshore portfolio for more than $70,000/acre.

“The reduction in valuations is promoting consolidation that wouldn’t have happened in 2018-2019,” said senior analyst Alisa Lukash. “Low equity prices and the need for investor support is motivating many operators to look for new options to merge, especially if it doesn’t involve heavy debt and cash.

“In turn, asset spinoffs and the sale of non-core acreage in liquids basins are comparatively lower now, and we do not foresee demand for such assets rising in the coming quarters.”

Spinoffs and cash transactions “could return when WTI recovers above the $45/bbl mark as most operators tightly hold on to their Tier 1 inventory,” Lukash noted.

Merger and acquisition (M&A) activity has accelerated in the second half of this year following the dramatic slowdown earlier wrought by Covid-19. The coronavirus threat to energy demand in the early months of 2020 “created a period of massive uncertainty, pushing both potential buyers and sellers to the sidelines,” Rystad’s team noted.

“So far this year, we have seen both mergers of equals as well as large acquisitions by major producers. That’s in contrast to 2019 when most of the transactions were small premium deals between play-focused operators.”

Operators that acquire “neighboring” E&Ps have typically been able to increase their existing leasehold positions, improve operational synergies and build reserves at reduced costs. The recovery in M&A since July “is helping extend the trend of consolidation that began in 2018, which was briefly disrupted earlier this year.”

More E&P consolidation, combined with an “increased degree of standardization” and lower oilfield services costs, should lead to a decline in drilling/completion expenses of up to 5% in 2021, according to Rystad. More capital also is expected to be allocated to Tier 1 acreage in the Permian to reduce breakeven oil prices toward $20/bbl.

“The ongoing onshore consolidation will surely result in a deceleration in the country’s rate of production growth in future,” Rystad said of U.S. activity. “The industry is moving away from the historical reinvestment rate of 75-90% toward a more conservative target of 70-80% because of a lack of investor support for aggressive growth models.”

“Under the new industry model, we expect U.S. tight oil production to recover to the pre-Covid records by 2023, with nearly all growth coming from the Permian Basin.”

The Permian, according to Rystad, may be the only major U.S. basin able to surpass its pre-coronavirus production record, with estimates of hitting 6 million b/d by 2025.

“The impact of the recent mergers on the global crude supply, demand balance might have a dual influence,” in stimulating more capital and in turn increasing domestic oil volumes if WTI were to average $50.

“On the positive side,” said analysts, “the smaller the peer group of large producers driving the increases in crude volumes, the easier it will be to ‘control’ and forecast U.S. supply.”