Financial adversity has continued to dog Lower 48 operators this year, with more voluntary restructurings, but the bankruptcies aren’t a harbinger of doom, according to Rystad Energy research. 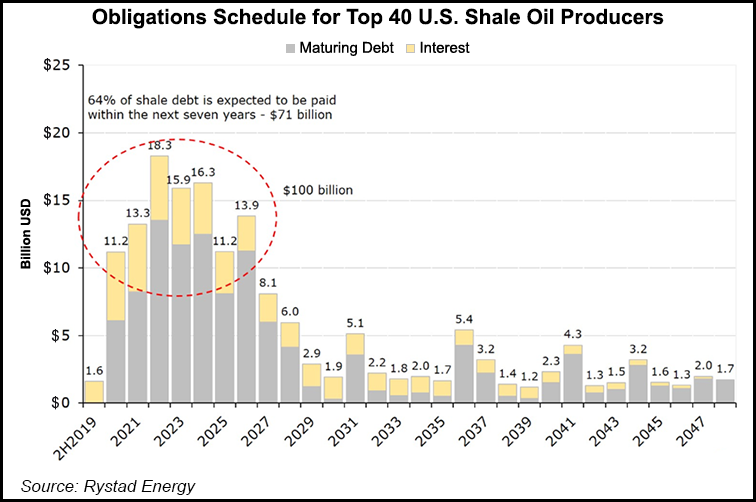 “In a nutshell, we do not believe the recent bankruptcies that have beset a number of shale players are indicative of an industry-wide epidemic,” said senior analyst Alisa Lukash, who works on the North American Shale team.

During the next seven years, Rystad estimated that the top-40 Lower 48 oil-heavy exploration and production (E&P) companies will spend about $100 billion on debt installments and interest, unless further debt refinancing is applied.

The E&Ps, which accounted for nearly one-half of U.S. onshore crude production in 2018, are facing interest payments of $2.6-5.1 billion annually, while the maturities schedule totals roughly $71 billion between 2020 and 2026, according to Rystad.

During the first half of 2019, those 40 E&Ps also generated $23.7 billion in cash flow from operations, while spending $28 billion on capital expenditures.

“Overall we see more than $112 billion in outstanding debt for the considered peer group, with a combined enterprise value of $355.5 billion as of September,” Rystad analysts said.

“These numbers indicate a lack of financing to deal with the burden of the obligations,” Lukash said. “Given the low levels of external capital additions during the past 10 months, the probability of debt refinancing in the coming quarters seems relatively slim.”

More acreage restructuring and merger/acquisition activity is expected, but many operators are managing by combining production growth with balanced spending and debt reductions.

“One should be careful about extrapolating on the basis of a few distressed companies,” Lukash said. “The peer group is very diverse both in terms of acreage quality and in capital efficiency.”

As of mid-August, around 26 North American E&Ps had filed for bankruptcy, according to Haynes & Boone LLP, which tracks filings. That number compares with 28 total filings last year and 24 total in 2017.

The worst may not be over, according to the Federal Reserve Bank of Dallas.

In its quarterly survey of energy executives in Texas, parts of New Mexico and Louisiana, the Dallas Fed said Wednesday that oil and natural gas activity declined during the third quarter, with oilfield service firms most affected as equipment utilization and operating margins declined.

“In general, the survey results suggest the second half of 2019 is going to be a tough one for the industry,” said senior research economist Michael Plante.