More than 3,000 people based in Houston have been furloughed by Halliburton Co., while ConocoPhillips and other big producers continue to cut capital spending in an increasingly dire situation, as the coronavirus and oil price war sink 2020 operating plans. 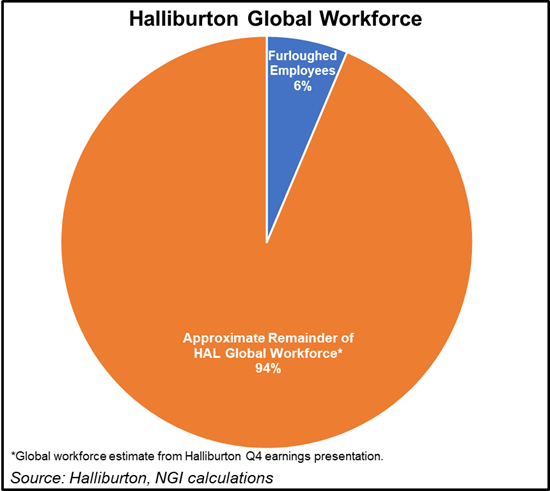 The furlough at the oilfield services giant impacts around 3,500 people.

“To best position our company in the current environment, Halliburton is implementing a mandatory furlough for employees at its North Belt campus in Houston” beginning Monday (March 23), spokesperson Erin Fuchs told NGI’s Shale Daily. “During the furlough, which will last up to 60 days, employees will work a one-week on, one-week off working schedule and will not be paid or permitted to perform any work on behalf of the company on their week off. Employees’ benefits, including health insurance, will remain in place during the furlough period.

“We believe moving to this schedule will allow us to best manage costs and provide full benefits for our employees during this difficult market,” Fuchs said.

E&Ps began slashing capital expenditures (capex) soon after the Organization and the Petroleum Exporting Countries and Russia began an oil price war earlier this month. More E&Ps began piling on in reducing their activity for 2020 as the economic implications of Covid-19 have become more dire in the past few days.

[We have been and will continue to cover the effects that COV-19 is having on natural gas markets and have grouped that coverage here for your ease of use. All NGI article content regarding the coronavirus will be free until further notice.]

Because oil prices are expected to move to “cash costs in the second quarter, we may see shut-ins of existing wells, which could at least temporarily lower production further in the U.S. and elsewhere,” Goldman analysts said.

Houston super independent ConocoPhillips is trimming spend by $700 million, or around 10%, which it plans to source from slowing activity in the Lower 48 and deferred drilling in Alaska. Share repurchases also have been reduced beginning in 2Q2020 to a quarterly rate of $250 million from $750 million.

“Our industry is clearly experiencing an unprecedented event brought about by simultaneous supply and demand shocks,” said CEO Ryan Lance. “The actions we are now taking reflect an acknowledgement of current events as well as uncertainty around the timing and path of a recovery.”

Lower 48 E&Ps continue to line up on capex reductions, including Dallas-based Pioneer Natural Resources Co., which has cut Permian Basin-focused spend by 45% to $1.7-1.9 billion. It is assuming average West Texas Intermediate (WTI) oil prices of $30-35/bbl for the rest of the year. In addition, Pioneer plans to slash the rig count by half to 11 within the next two months.

Denver-based Cimarex Energy Co., which operates in the Permian and Midcontinent, expects to cut capex by 40-50% from original guidance of $1.25-1.35 billion.

“Our revised outlook assumes a $30/bbl WTI price for the remainder of 2020,” CEO Tom Jorden said. “Our top priority is to preserve our balance sheet strength. Under this scenario, Cimarex will not incur additional debt in 2020 and will generate sufficient free cash flow to preserve payment of our dividend to our shareholders.”

Big Permian operator WPX Energy Inc. has cut capex by one-quarter, and it is holding the line at spending no more than $1.4 billion this year. The Tulsa-based independent also has “the flexibility to cut further…Discussions with vendors about service costs are actively occurring, which presents known opportunities for WPX to lower capital further and increase its free cash flow target.”

Houston-based Callon Petroleum Co., which also works in the Permian as well as the Eagle Ford Shale, is reducing operational capex to $700-725 million from $975 million. By the end of June, it plans to reduce the operated rig count to five from nine.

Eagle Ford operator Penn Virginia Corp., also based in Houston, has cut capex by 30% for the year and expects to have only one operating rig from April to the end of the year.

“This is clearly a challenging time for the industry, but we believe Penn Virginia is well positioned to weather this storm,” CEO John A. Brooks said. The company expects to operate within cash flow “even in a $30-35 WTI oil environment.”

Meanwhile, Gulf of Mexico operator W&T Offshore Inc., also based in Houston, has reduced capex to $15-25 million from $50-100 million.

“At the midpoint of our updated 2020 capital budget, we expect to remain cash flow positive at or above $25/bbl of oil and $1.50/Mcf of natural gas,” CEO Tracy Krohn said. “While our 2020 drilling program will now proceed at a slower pace, we remain confident in our strong drilling inventory.”

A somewhat hotter lean in the overnight forecasts helped natural gas futures bulls regain some ground in early trading Tuesday. The September Nymex contract was up 3.4 cents to $2.187/MMBtu at around 8:45 a.m. ET. There were no major shifts in the weather outlook overnight, according to NatGasWeather, though the forecaster noted a small uptick…