The Lower 48’s ample supply of drilled but uncompleted wells, aka DUCs, is coming down at a quick pace and is expected to reach “normal” levels by year’s end, tightening the oil supply according to Raymond James & Associates Inc. 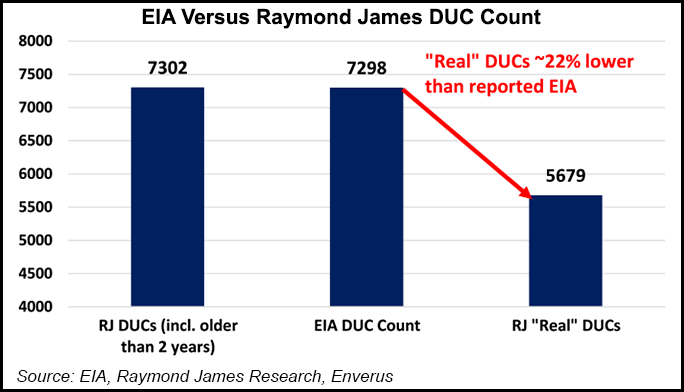 In a note to clients, Raymond James analyst John Freeman made the case that the U.S. Energy Information Administration (EIA) may be overstating the number of actual DUCS not yet completed.

The EIA in the most recent Drilling Productivity Report for December said the total DUC inventory across seven main Lower 48 regions stood at 7,298, down from 7,443 in November.

However, the EIA’s DUC count is 22% “too high and contains many older wells that are likely to never be completed,” according to Freeman.

The federal data contains a “plethora of DUCs drilled back as far as 2014 that are ‘dead in the water.’” Even if the older DUCs were to be finished, they “would not produce at near the rate as wells drilled with cutting-edge technology and lateral lengths.”

In addition, the escalation in mergers and acquisitions last year across the exploration and production (E&P) sector consolidated a lot of onshore acreage. That has led E&Ps to build larger, more efficient pads with more wells. The additional wells have created a more “normal” DUC inventory than years past.

What Freeman sees in Raymond James data is the DUC inventory reaching “normal levels by the end of this year” at the current pace that E&Ps are finishing them. That would require “more spending to hold completions levels flat in 2022 and constraining supply growth.”

The pandemic created a historic cut to energy demand, which led to a tremendous work-in-progress inventory of DUCs, he noted. Finishing those wells began in earnest in the second half of 2020, as E&Ps eschewed more development capital spending to concentrate on what they had in inventory.

As oil prices briefly descended into negative territory last April, the DUC count stabilized at around the 8,000 mark, with both drilling and completions falling more than 20% from their 2019 highs.

The DUC drawdown in the final three months was the largest ever, by a 50% margin, if the EIA data was correct. That would mean E&Ps would have enough DUCs on hand to keep finishing them up through the end of 2022.

However, “we believe the EIA number is significantly inflated and the ‘real’ DUC number is much lower,” Freeman said.

Rystad Energy in an analysis in late January said the Lower 48 E&Ps already had drawn down their DUC inventory to pre-pandemic levels. According to the firm, the DUC count reached a multiyear high last June of 6,548 wells in the country’s major oil regions, then fell to 5,700 by year’s end.

The amount of “live” DUCs, excluding tentatively abandoned wells previously drilled, also fell to 3,528 in December from 4,353 in June, according to Rystad. The number of horizontal oil DUCs near the end of January, said analysts, was similar to where it was in early 2020 before the Covid-induced market downturn began.