After weeks of surprising to the upside, the Energy Information Administration (EIA) stunned the natural gas market on Thursday with a much lower-than-expected 81 Bcf injection into storage. 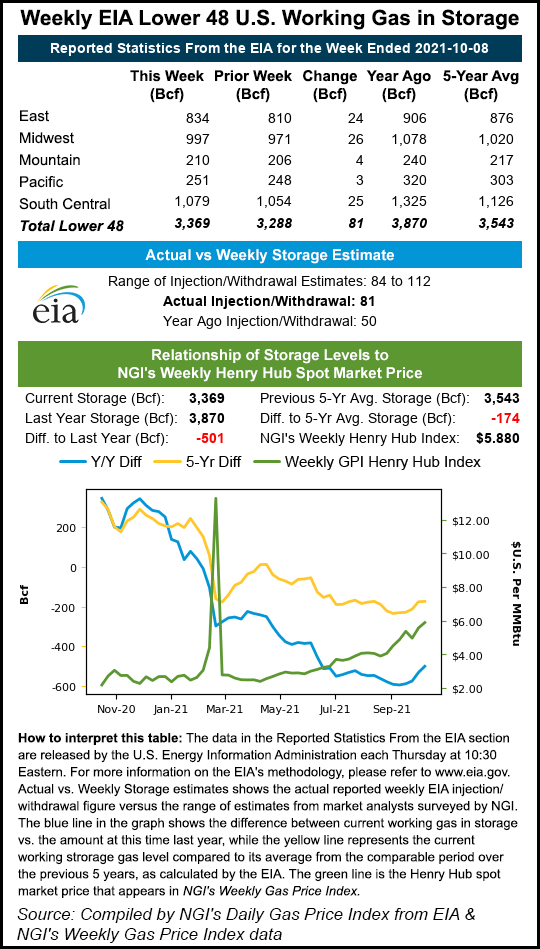 Although there were concerns of a low-side storage build, the figure came in 3 Bcf below the lowest estimate ahead of the inventory report. The latest EIA data covered the week ending Oct. 8.

Natural gas futures prices, already more than 20 cents higher day/day, immediately spiked on the news. The November Nymex gas futures contract was trading at around $5.810/MMBtu ahead of the report and then shot up to $5.952 as the print crossed trading desks.

“Off to the races,” Criterion Research LLC analyst James Bevan said on The Desk’s online chat Enelyst after the report was issued.

In trying to make sense of the huge miss, Bevan and other market observers pointed out that regardless of the reason for the smaller-than-expected build, much higher prices are likely to result from the tighter figure.

“The bulls are going to feast on this,” said analyst firm Celsius Energy, which had projected a 95 Bcf injection.

By 11 a.m. ET, however, Nymex futures action was a bit calmer. The November contract was back at $5.870, still 28.0 cents above Wednesday’s close but far off the $5.964 peak reached in the minutes after the report.

Enelyst participants noted that seasonal outages and strong power burns likely contributed to the lighter storage build. Wind generation also played a major role. Enelyst managing director Het Shah said wind generation for the week ending Oct. 8 was at around 20,500 MWh, less than half of what is projected for this week.

“Today’s report was one of the most tight reports we’ve had this summer, weather adjusted. I show the report being about 6 Bcf/d tight versus the three-year average,” Shah said. “Next week’s report should be weak again based on wind picking up.”