After soaring to record levels in March, natural gas deliveries to U.S. export facilities plummeted by more than half only two months later as Covid-19 amplified demand destruction resulting from a mild winter, according to the Energy Information Administration (EIA). 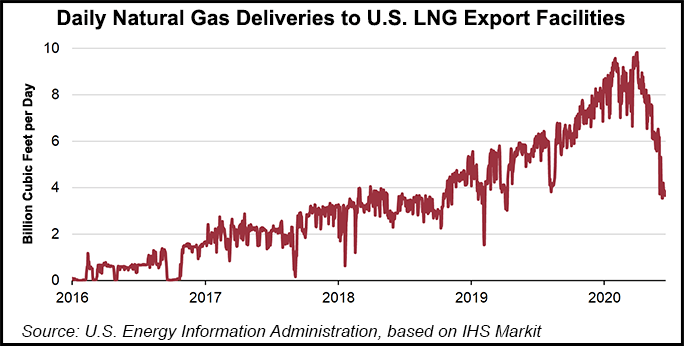 The EIA said feed gas deliveries to liquefied natural gas (LNG) production terminals fell to less than 4.0 Bcf/d in June, after hitting a record 9.8 Bcf/d in late March. LNG exports were only slightly lower from February through April, but they started to decline in May, the EIA said. The agency estimated that 62 cargoes were loaded in April and 52 cargoes were loaded in May, with gross U.S. exports totaling 7.0 Bcf/d and 5.8 Bcf/d, respectively.

Lower 48 exports are projected by the EIA to fall to a low of 3.2 Bcf/d in July before increasing in each of the remaining months of the year. However, the agency expects capacity utilization to remain below 50% through August.

The swift downturn in U.S. exports has occurred as historically low spot prices in Europe and Asia have affected the economic viability of U.S. LNG exports. Domestic LNG exports are priced at a premium to Henry Hub, in addition to tolling fees and transportation costs to destination markets. Higher spot and futures prices at Henry Hub compared with Title Transfer Facility prices in Europe since early May have contributed to some cargo cancellations from the United States this summer, according to the EIA.

European prices have been dragged down in part by robust storage, which is already around 77% full with months to go before cold weather returns. A similar story has unfolded in Asia as the coronavirus pandemic has crushed demand around the world.

Last month, shipbroker Poten & Partners said 130 U.S. cargoes would be canceled between May and October, including more than 30 this month. Up to 23 cargoes are expected to be canceled by Cheniere Energy Inc.’s customers alone in August, Bloomberg reported Monday.  Reuters, meanwhile, cited market sources in reporting that up to 45 U.S. cargoes for August loading could be canceled from the nation’s export terminals.

In comparison, the EIA said 74 cargoes were exported from the United States in January, totaling 8.1 Bcf/d, both record highs.

The United States in 2019 became the world’s third-largest LNG exporter on an annual basis, with only Qatar and Australia exporting more. The surge in exports occurred as several new export terminals became operational, including the third production unit at Freeport LNG in Texas.