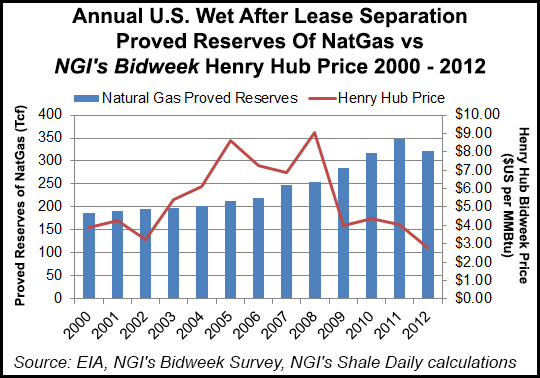 Proved reserves of natural gas declined to 322.7 Tcf in 2012, down 7.5% compared with 348.8 Tcf in 2011, according to EIA’s latest “U.S. Crude Oil and Natural Gas Proved Reserves” report. The decline came “as operators revised the proved reserves of their existing natural gas fields downward in response to lower natural gas prices,” EIA said. The average gas price in 2012 was 34% lower than in 2011, “presenting more challenging economic conditions for estimating proved reserves.”

Proved reserves in shale gas plays accounted for 40% (129.4 Tcf) of wet natural gas proved reserves in 2012. But gains in the Marcellus (up 10.9 Tcf) and Eagle Ford (up 7.8 Tcf) were more than offset by price-driven reductions of reserves estimates in more mature shale plays, such as the Barnett and the Haynesville, which declined by a combined 20.7 Tcf in 2012.

Oil proved reserves, which include crude oil and lease condensate, increased in 2012 to 33.4 billion bbl, a 15.4% increase compared with 29.0 billion bbl in 2011. The surge was led by reserve additions in Texas and North Dakota, EIA said. It was the fourth consecutive year in which U.S. proved oil reserves increased.

Texas recorded the largest volumetric increase (up 3.0 billion bbl) in proved oil reserves among individual states, largely because of development in the Permian and Western Gulf basins, EIA said. North Dakota had the second-largest increase (up 1.1 billion barrels), driven by development of the Bakken and Three Forks formations in the Williston Basin.

Proved reserves are estimated quantities of oil and natural gas that analysis of geological and engineering data demonstrate with reasonable certainty to be recoverable in future years from known reservoirs under existing economic and operating conditions. EIA’s report reflects estimates of proved reserves at the end of 2012 based on the agency’s annual survey of domestic oil and gas well operators.

At the beginning of 2013, the Americas accounted for one-third of proved worldwide reserves of crude oil (536 billion bbl) and one-tenth of proved natural gas reserves (688 Tcf), as well as immense recoverable resources of oil and gas including reservoired resources, tight oil and shale gas, EIA said in another recent report(see Shale Daily, Feb. 18).