Analysts at U.S. Capital Advisors LLC (USCA) said utility stocks may have upside potential in the near future as the shale revolution continues, with more customers converting to natural gas, new construction rates returning to normal and the nation continuing its recovery from the 2008 recession. 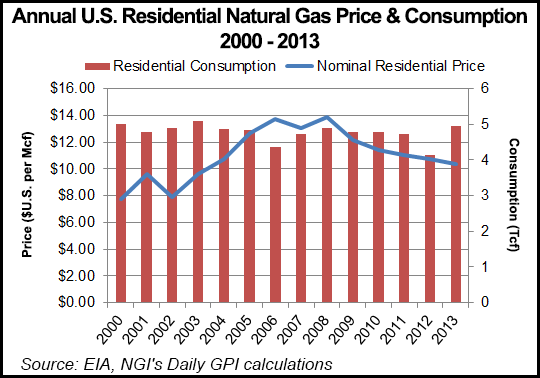 “The recession of 2008 cratered growth rates, but the shale revolution is driving rebound via faster gas conversions,” the analysts said. “Historically, gas utility customer growth [was about] 1% annually and driven primarily by new housing starts. The 2008 recession smacked customer growth hard, dropping it from about 1% in 2007 to almost nil by 2009. Few gas utilities were spared the effects of the downturn.

The USCA analysts said the outlook for future conversion growth looks promising, led by the Northeast and Mid-Atlantic regions.

“Of the approximately 120 million households in the U.S., only about 49% use natural gas for their heating fuel despite it being the lowest-cost option,” the analysts said. “Natural gas has historically enjoyed a price advantage relative to heating oil and propane, but the spread has become much more pronounced since 2009. If Nymex [New York Mercantile Exchange] forward gas prices for the next five years hold true, it should continue to be a great environment for more gas conversion activity.

A slowly improving economy also is boosting new housing starts, and analysts estimated that annual customer growth could exceed 1% in the next few years.

“Along with faster gas conversions, modest economic gains have fueled improvement in housing starts since 2010. With both trends at play, last year the gas customer growth rate reached within spitting distance of rebounding to the pre-recession level of about 1%.

“Assuming continued economic improvement and favorable gas conversion dynamics, we see gas customer growth of about 1.0% [and higher] from 2014-2016, up from 0.5% from 2008-2013, and fully back to pre-recession levels. Faster growth names in recent years, more heavily levered to more gas conversions, should continue to lead the pack.”

The second report of the series by USCA is to cover rate relief, while the third and final reports would address infrastructure replacement.