While there have been some signs of reawakening from the long commodity price slumber in the Bakken Shale, the effects of more than two years of low crude oil prices continue to show in the number of drilled but uncompleted (DUC) wells. 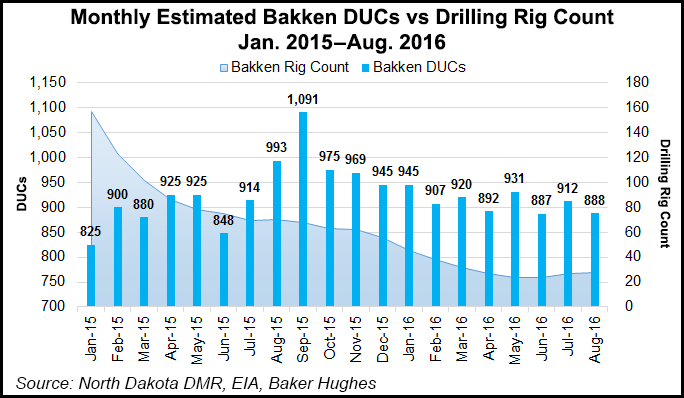 Lynn Helms, who directs the North Dakota Department of Mineral Resources (DMR), told a group of county officials on Wednesday that the situation could change quickly, and he offered three scenarios to his annual outlook for oil and natural gas development: a “lower for longer” forecast that would suppress drilling, the expected case, and a “price shock” scenario with a rapid turnaround.

Helms addressed the 16 North Dakota Association of Oil/Gas and Coal Producing Counties, and said the “lower for longer” scenario assumed West Texas Intermediate (WTI) oil prices would remain below $60/bbl. In that scenario, rigs in the Bakken would continue to focus mostly on four counties — Dunn, McKenzie, Mountrail and Williams — for the next 10 years, with the well count hitting 55,000 by 2050.

What he expects, however, is that WTI prices will exceed the $60/bbl threshold and drilling rigs will number 50-75 over the state’s next two-year budget cycle. Under this scenario, the well count by 2050 increases by up to 65,000. Under the price shock outlook, WTI prices would climb above $70/bbl and rig counts would be average in the 75-100 range over the next two years.

The level of DUCs remains about three times as high as in early 2014, before the price collapse.

In the meantime, while DUCs are dwindling in some parts of the onshore, that still isn’t the case in the Bakken, a DMR spokesperson told NGI‘s Shale Daily on Wednesday, predicting that WTI prices would have to get well above $50/bbl and remain there for a while before North Dakota returns to its pre-2014 levels.

“It all depends on what prices continue to do,” the spokesperson said. WTI prices above $50 for 90 consecutive days or more “will provide some confidence for companies to mobilize [hydraulic fracturing] fracking crews and bring that number down, but I don’t think we have seen that consistency yet to say the number is on the way down.”

For this year, North Dakota’s DUCs have remained at around 900, compared to what DMR considers more “normal” levels of 300-400, depending on the time of the year.

In the depth of the price decline earlier in the year, Helms said DUCs in North Dakota were historically high, above 800, and he predicted that they would stay up there until oil prices reached $50-55/bbl and remained there for 90 days or longer (see Shale Daily,Aug. 17).

“Operators remain committed to running the minimum number of rigs while oil prices remain below $60/bbl WTI,” he said in a monthly June production report.

Since the price crash in mid-2014, North Dakota has reconfirmed its rules on DUCs, and Helms has dealt with operators seeking to classify hundreds of wells as “temporarily abandoned” (see Shale Daily,Oct. 23, 2015). A year ago, North Dakota’s three-member Industrial Commission (IC) under which DMR falls, voted unanimously to reaffirm its one-year extension for DUCs to be completed.

Under current IC rules, from the moment a well is drilled to total depth an operator has one year to bring the well into production. After the one-year deadline, the well falls into an abandoned status and is considered in violation of IC rules.

Meanwhile, DMR does not track merger and acquisition activities, but it does track well ownership transfers. At the end of September, 507 separate Bakken wells were awaiting ownership transfers, reflecting 19 transactions among 38 different companies.