A two-year trend of rising proved reserves of natural gas and oil in the United States ground to a halt amid a decline in prices in 2019, according to the Energy Information Administration (EIA).

Natural gas proved reserves decreased 1.9% year/year in 2019 to 494.9 Tcf from 504.5 Tcf. This is the first annual decrease in proved gas reserve in the United States since 2015, but reserves remain at their second highest level ever, the agency said. Total U.S. gas production increased 9.8% year/year.

Lower 48 basins fared better. Proved gas reserves from unconventional U.S. plays increased to 71% at year-end 2019 from 68% in 2018. The largest net gain by volume in 2019 occurred in Ohio, which grew by 10.4 Tcf. The EIA said the increase was driven by continuing development of the Utica/Point Pleasant shale play in the Appalachian Basin.

The largest net decrease in proved gas reserves in 2019 was in Texas, which was down 12 Tcf in the period. The EIA said net downward revisions of reserves in the Eagle Ford and Barnett shales contributed the most to the annual drop. Declines in the Haynesville Shale also contributed to the steep decreases in Texas.

Responses were received from 372 of 412 sampled operators, which provided coverage of about 90% of proved reserves of oil and natural gas at the national level.

Alaska producers reported the largest net increase, adding 259 million bbl of proved reserves of oil and lease condensate in 2019, while producers in New Mexico saw the second-largest net increase of 226 million bbl. Texas rounded out the Top 3 with a 179 million bbl gain, with extensions and discoveries in the Permian Basin of southeastern New Mexico and West Texas contributing the most, according to EIA. Colorado recorded the biggest decline in proved reserves of crude and condensate, falling 154 million bbl in 2019.

“Spot market prices are not necessarily the prices used by operators in their reserve estimates for EIA because actual prices received by operators depend on their particular contractual arrangements, location, hydrocarbon quality and other factors,” EIA said. “However, spot prices do provide a benchmark or trend indicator.”

“As a result, EIA expects operators to report significantly fewer additions of proved reserves from extensions and discoveries in the 2020 reserves report.”

In the latest Short-Term Energy Outlook, EIA said U.S. production in 2020 would decline an estimated 7% for crude oil and 2% for natural gas. 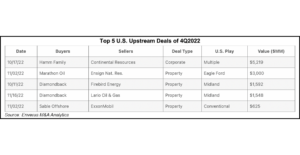