The Pennsylvania Public Utility Commission (PUC) said it collected more than $173 million in impact fees from the state’s natural gas producers in 2016, but fees declined on low commodity prices to the lowest level since enacted in 2012 and were down for the third year in a row. 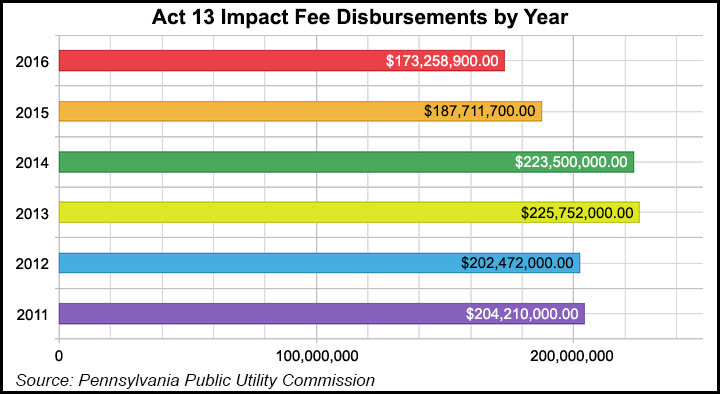 The amount of impact fee revenue collected for 2016 is close to the $174.6 million estimate forecast by the state’s Independent Fiscal Office (IFO) last January, which based its estimate on continuing low gas prices. The PUC said lower gas prices led to a $5,000 reduction in fee revenue per well, and that the increasing age of many wells also resulted in less revenue. Impact fee revenue is down 23.3%, about $52.5 million, from a high of $225.752 million collected in 2013.

Pennsylvania’s impact fee is levied on all unconventional wells in the state during their first 15 years of operation, regardless of how much they produce. It is calculated with a multi-year schedule that is based on the average annual price of natural gas.

County and municipal governments directly affected by drilling are to receive more than $93.128 million total in 2016 disbursements, while an additional $62.086 million would be placed into the Marcellus Legacy Fund, which supports environmental, highway, water, sewer and other projects throughout the state. Another $18 million is to be distributed to state agencies.

Pennsylvania lawmakers have debated the merits of a severance tax on natural gas production for years, over the objections of the industry and the Marcellus Shale Coalition (MSC). Earlier this year, Democratic Gov. Tom Wolf proposed enacting a severance tax for the third time since taking office in 2015. Last April, the IFO said Wolf’s proposal for a 6.5% severance tax would make Pennsylvania’s the highest effective rate in the country.

“Pennsylvania’s unique tax on natural gas…continues to be a policy solution that’s working as designed, directly benefitting communities in all 67 counties throughout the commonwealth,” MSC President David Spigelmyer said Wednesday. “We understand the budget challenges that Pennsylvania faces, but proposals to enact even higher energy taxes, along with even more costly and unnecessary regulations, hurt the commonwealth’s competitiveness and our state’s ability to attract job-creating investment.”