If aggressively implemented, a combination of low-emission alternative fuels and efficiency advances could reduce carbon dioxide (CO2) emissions in the transportation sector by 29% by 2030, a study by a Boston-based research firm said. 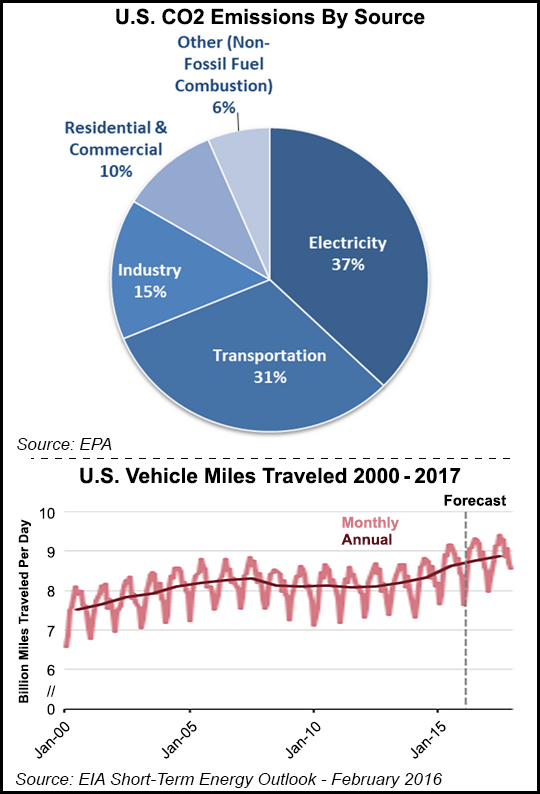 This would require a reversal of what has been a 1.5% annual increase in transportation CO2 emissions since 2000.

Worldwide, road transportation represents about one-sixth of the CO2 emissions, and its share is rising, according to a report from Lux Research that projected the growth of low-carbon vehicle fuels and increased vehicular efficiency eventually could drive big reductions.

The study said “significant strides” still have to be made in transportation technologies to first reverse the upward trends and then reach the 29% reduction level over the next 15 years.

While the worldwide growth of transportation emissions has been steadily upward, there have been wide variations in different regions with the United States CO2 from transportation steadily declining since 2007. U.S. emissions were 1.4 billion tons (GT) last year, compared to a global total of 5.7 GT.

Lux researchers examined a “business-as-usual” scenario in addition to the impact from an aggressive climate change response through biofuels, renewables and various efficiency advances. The status quo scenario would mean 8.8 GT in 2030, or a 2.9% annual growth in emissions. However, if all the nations do as agreed in the Paris climate agreement, emissions could be cut to 6.7 GT in 2030.

“Business-as-usual projections result in China surging to the top [among nations] with 2.1 GT in 2030,” Yu said. Existing biofuel initiatives in the United States and European Union “position both to be on pace to meet 2030 targets while flagrant offender [nations] have failed to implement similar emissions reduction policies.”

Ultimately, to achieve the 29% emission reduction target, many nations would have to adopt biofuel blending mandates and introduce alternative fuel vehicles to their fleets, the report concluded, noting this level of reduction depends on the highest adoption of biofuel, alternative fuel and efficiency advances among low-, medium- and high-adoption scenarios.

While CNG and LNG offer 16% emissions reductions compared to diesel, those numbers for RNG and landfill gas used in CNG and LNG grow to 66.4% and 69.1%, respectively.