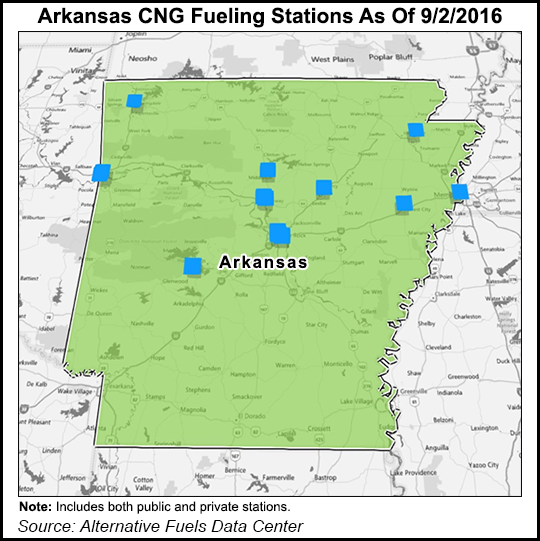 In 2014, Trillium designed, built and began operating a CNG station for the bus fleet, and now Rock Region has asked to extend the CNG maintenance services.

Bill Cashmareck, Love’s general manager of natural gas operations, said the company’s Trillium team is focused on providing comprehensive natural gas vehicle (NGV) services nationwide. “It’s important to us to keep systems performing at their maximum capabilities and to rapidly respond to any request through our 24/7 monitoring service.”

Love’s more than doubled its network of CNG stations with the acquisition of Trillium earlier this year (see Daily GPI,Feb. 10). Trillium CNG provides fuel for thousands of NGVs daily and delivers more than 55 million gallons of CNG annually.

Under its contract with Rock Region METRO, Trillium said it will continue over the next three years to maintain the private fueling station for the fleet with the capability to fuel up to 75 buses daily. The transit system serves 3 million passengers annually and plans to replace its remaining 43 diesel-fueled business with CNG-powered ones by the end of 2025. It originally started with 15 CNG buses in 2015.

Six different contractors have won the bidding to provide the USPS with up to 50 prototype alternative fuel vehicles for consideration in developing the new general delivery vehicle (GDV) for delivering America’s mail. Eventually, USPS is expected to buy hundreds of thousands of the GDVs, and the six firms vying for contracts are in line to get up to $37.4 million.

The postal service is looking for a GDV that will operate efficiently and economically for 20 years, according to officials with one of six bidders, Workhorse. Other companies working to come up with the ideal vehicle and fuel alternative are AM General, Karsan, Mahindra, Oshkosh and Utilimaster.

Among the current postal fleet, 160,000 vehicles are right-hand drive GDVs, but for the future the postal service will be looking for both left- and right-hand vehicles. Half of the prototypes the USPS plans to evaluate will feature hybrid and new technologies, including alternative fuels.

The 60-foot alternative fuel buses are already being deployed by transit systems around the nation, including Santa Clara, CA, Honolulu, San Francisco and Seattle.