A 171-acre site at the Port of Columbia in Caldwell Parish, LA, could be the site of a 32 million gallons/year renewable diesel plant, Gov. John Bel Edwards said Friday. 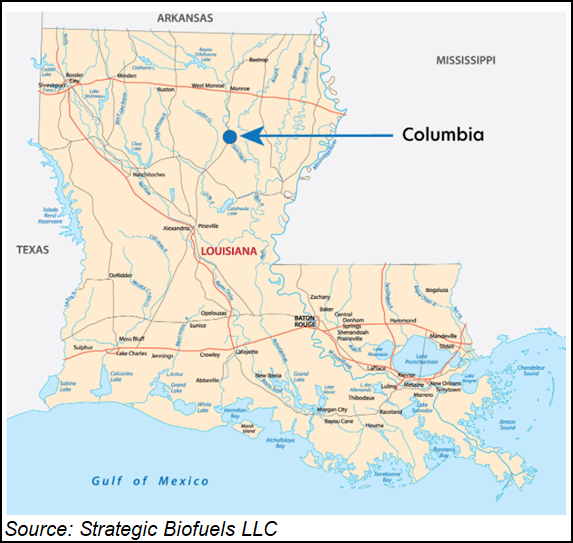 The estimated $700 million-plus facility would use “established refinery processes” with wood waste as the feedstock. LGF is completing feasibility and financing phases, with a final investment decision (FID) scheduled by late next year. If the project is sanctioned, it could be in operation by mid-2025.

“Louisiana Green Fuels is an example of how our state can merge traditional and emerging forms of energy in exciting ways to address climate change,” Edwards said.

LGF is working with Jena, LA-based Justiss Oil Co. Inc. “to drill a sequestration test well that will confirm the integrity of carbon storage a mile below the earth’s surface.

“This project would boost our state’s forestry sector by harvesting timber byproducts in a sustainable fashion, and the refinery’s renewable diesel output would be accomplished in a carbon-negative fashion. That means this refinery would achieve better than net-zero emissions; it would actually remove more carbon from the environment than it produces.”

Strategic Biofuels said it had raised 85% of the early financing from investors in North Louisiana. In addition to the Columbia renewable diesel refinery, the company envisions developing more Louisiana refineries that would target production of renewable aviation fuel as well as diesel.

“Caldwell Parish is the ideal location for our Louisiana Green Fuels plant,” said Schubert. “It combines the required forestry waste feedstock for fuel production and the right geology for carbon sequestration” within the state.

According to Louisiana Economic Development (LED), about 76 direct jobs could be created with the project along with an additional 412 indirect jobs. During a 30-month building phase, the project would generate an estimated 450 construction jobs.

LED began formal discussions last July with Strategic Biofuels about the potential project in July 2020. With an FID, the state would negotiate a competitive incentive package to secure the project.

Louisiana, home to the Haynesville Shale and the site of a plethora of refineries and petrochemical complexes, is home to a growing number of green projects, including renewable diesel operations by Valero Energy Corp.

The estimated $9.2 billion multi-year project, to be sited at the Port of Greater Baton Rouge, could create more than 5,000 direct and indirect jobs.