The Port of Columbia in Caldwell Parish, LA, and Strategic Biofuels LLC jointly announced the port has received a $15 million grant to improve the port’s accessibility and infrastructure in preparation for the Louisiana Green Fuels (LGF) renewable diesel plant. 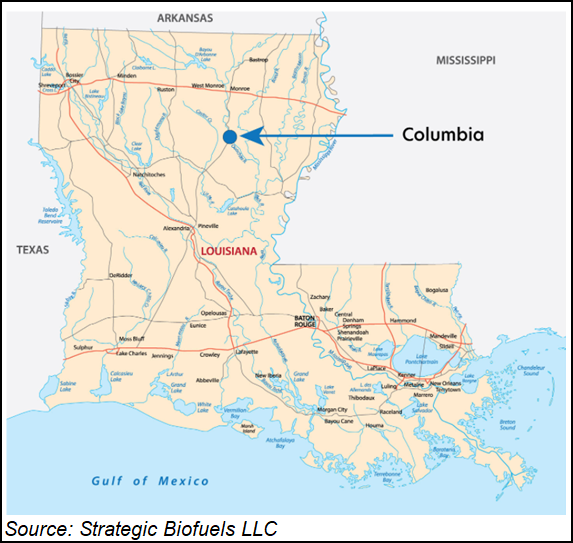 Funds would first be put toward upgrading surrounding roads to support the LGF’s estimated $700 million construction and infrastructure requirements. These upgrades are scheduled to begin mid-year, while construction for a 37-car rail spur and overpass is scheduled for 2023.

“The early upgrading of Riverton Camp Road coming this summer provides strong support for LGF’s aggressive construction schedule,” said Strategic Biofuels COO Bob Meredith. “It allows us to begin actual plant construction as soon as the full project funding is secured, and we expect that to be in early 2023…

“The port has also been a key contributor in our efforts with DOTD and Union Pacific Railroad. The strong support we’ve continued to receive from Caldwell Parish confirms the wisdom of locating the plant here.”

In a stakeholder update in December, CEO Paul Schubert noted that the company has secured more than 300 acres at the Port of Columbia site. It is enough land for a second plant once the first is complete, he said.

The geology of the proposed plant site is, according to Strategic Biofuels, “ideal for sequestration.” Last August, the company demonstrated that carbon dioxide (CO2), the main greenhouse gas emitted during the fuel production process, may be stored deep underground for carbon capture and sequestration (CCS). The storage reservoir has capacity to store all the CO2 produced over the plant’s lifetime, according to company officials.

With the successful completion of the CCS well test, Strategic Biofuels estimated that the total carbon intensity of the LGF plant would be minus 238 grams of CO2 equivalent/megajoule (gCO2e/MJ). For comparison, the California Air Resources Board estimates that typical renewable diesel has a carbon intensity score of 50-100 gCO2e/MJ.

Considering low carbon fuel standard credits, as well as federal fuel standard and tax credits, if the plant were to produce around 33.7 million gallons/year as designed, Strategic Biofuels said total plant revenue could be $527 million/year.

LGF is completing feasibility and financing phases, with a final investment decision scheduled by February 2023. If the project is sanctioned, it could be fully operational by late 2024 or early 2025.