Southern California Gas Co. (SoCalGas) said it had safeguarded its Aliso Canyon storage facility from a wildfire that broke out in Los Angeles late Thursday and spread quickly throughout the northern part of the city, consuming more than 4,000 acres. 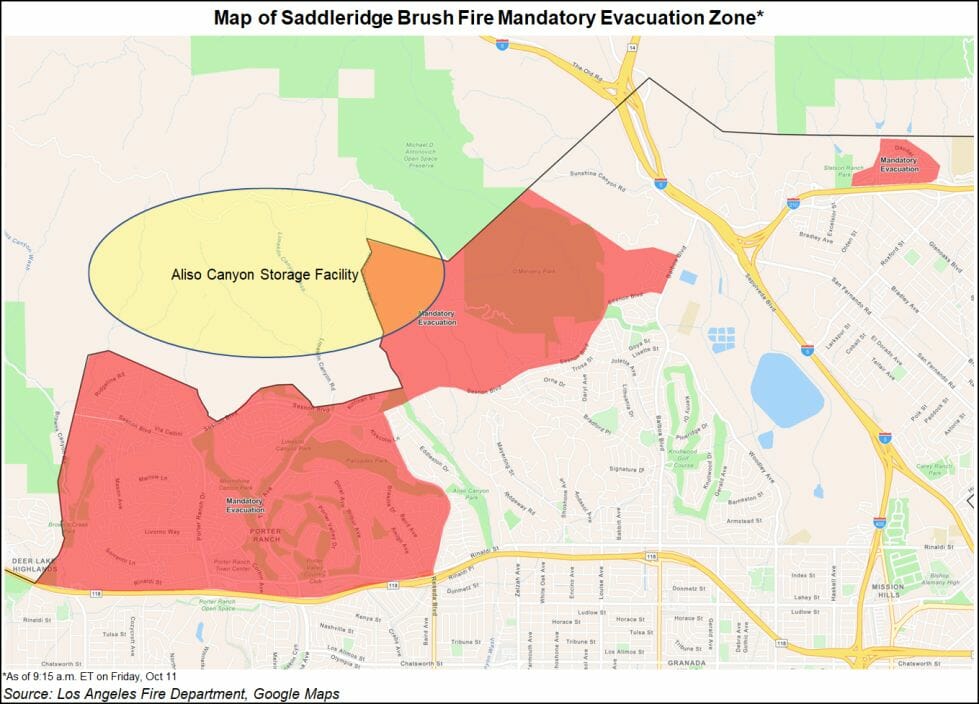 The blaze was burning near Aliso, the state’s largest natural gas storage facility and the site of an infamous 2015 gas leak that lasted months. Footage from the scene showed the Saddleridge Fire raging along a ridgeline near the facility early Friday, while other hotspots encroached its borders.

SoCalGas spokesperson Christine Detz said later Friday that firefighters were battling the blaze in and around the Aliso Canyon facility, “with some active fire burning within the field’s boundaries.”

Detz added that, “All SoCalGas Aliso Canyon storage facility staff are safe, and the facility has been evacuated by fire officials.” First responders were on the scene as of 6 a.m. PT, and the company said there is no known damage to the facility.

“SoCalGas maintains a detailed and systematic brush clearing program around our facilities to minimize the chances of a brush fire affecting storage wellheads,” she said.

The company does not expect the fire to damage its storage wellheads, and crews plan to inspect the facility once the evacuation is lifted, Detz added.

Aliso Canyon, with a working underground storage capacity of 86 Bcf, serves more than 11 million customers and provides fuel to 17 gas-fired power plants, according to SoCalGas. Since the leak in 2015, the facility has been subject to strict regulations, operating at partial capacity. The current approved capacity is 34 Bcf, Detz said.

SoCalGas said it was aware that fenceline methane monitors at the storage facility recorded elevated readings overnight. But the company stressed those spikes were likely related to heat and smoke from the fire, adding that there were no methane leaks to report on Friday.

The fire ignited in Sylmar, the city’s northernmost neighborhood, before jumping the 5 Freeway into the Granada Hills and Porter Ranch neighborhoods, prompting the evacuation of 12,700 homes.

By Friday, 23,000 residences were under an evacuation order that city officials said impacted 100,000 people.

“This is a very dynamic fire,” said Los Angeles Fire Department (LAFD) Chief Ralph Terrazas at a Friday morning press conference. About 1,000 firefighters were responding and none of the blaze had been contained by mid-day.

Terrazas noted that conditions were ripe for fire, with winds having been above 25 miles per hour in recent days. By Friday morning, Saddleridge had consumed roughly 4,700 acres. LAFD estimated early Friday that it was moving at about 800 acres per hour.

Officials also said that 25 homes had been destroyed and one man died after going into cardiac arrest during a conversation with firefighters near the blaze.

SoCalGas, the nation’s largest natural gas distributor with more than 21 million customers, said it was “actively monitoring” the Saddleridge and other fires burning in its service territory. The company said crews were ready to isolate or return service to homes or neighborhoods impacted by the incidents.

Other fires were burning outside Los Angeles in nearby Riverside County. Southern California Edison warned that it could shut off power to more than 170,000 people in the region as Santa Ana winds fueled multiple blazes. Saddleridge came during a week when Pacific Gas & Electric Co. shut off power to hundreds of thousands of people in Northern and Central California to avert wildfires there.