Los Angeles City Council at the end of February directed the city attorney to draft an ordinance banning well stimulation practices. It is reportedly aimed at hydraulic fracturing (fracking) but is cast more broadly than that, according to oil/natural gas industry sources. 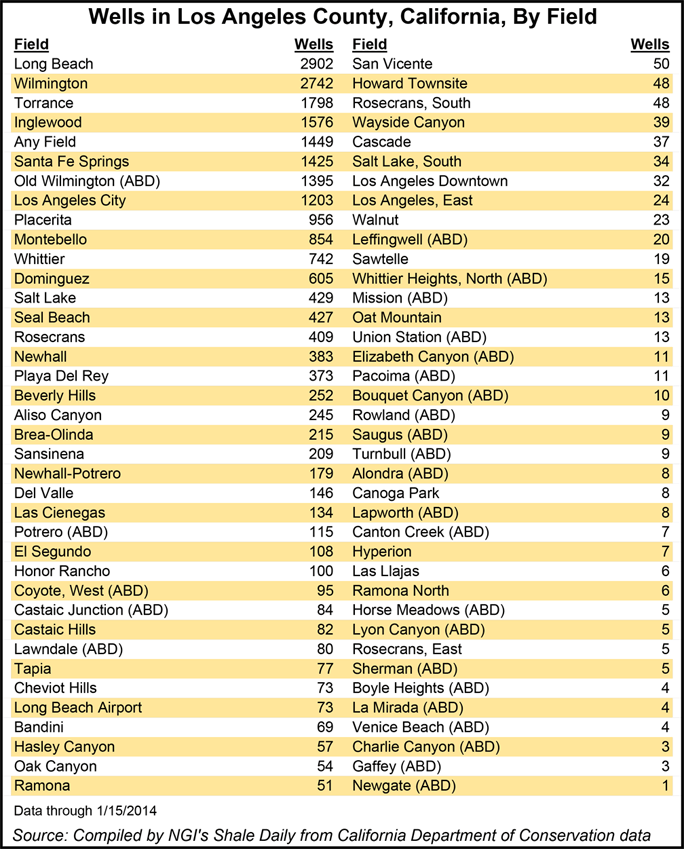 Although there is currently no fracking in the city (the broader Los Angeles County region is different), industry leaders in Sacramento indicated some drilling operations could be shut down if a new law looks anything like what the 15-member council voted to pursue as a draft ordinance last Friday.

Council member Paul Koretz sponsored the resolution. It is unclear what stimulated the council’s interest, but urban oil drilling has stirred controversy a short distance south of downtown near the University of Southern California campus (see Daily GPI, Nov. 27, 2013).

While oil production long ago tapered off within the city, Los Angeles still has more than 1,800 active oil wells and nearly 3,000 abandoned oil/gas wells.

Rock Zierman, CEO of the California Independent Petroleum Association (CIPA), told NGI there is still a lot of time — months — for the industry to weigh in on the issue of nation’s second-largest city trying to ban most, if not all, drilling. There is no timetable for the city’s ordinance development process. CIPA has a member in the Inglewood Field that could be impacted if the proposed measure keeps its current form.

“There is no hydraulic fracturing ongoing in the city of LA, but it is kind of a boogeynan, Zierman said. “The [council members] talk about fracking, but what they are really doing is to ban all oil/gas production.”

A spokesperson for the Western States Petroleum Association (WSPA) said the issue came up suddenly. The council action referred the matter to the city attorney to prepare a formal ordinance, said WSPA communications chief Tupper Hull.

“The resolution is very problematic for oil producers in the county because it apparently, and possibly inadvertently, included all injection of produced water, which [could] totally shut down production if not changed,” Hull said. It’s not clear to us where this came from or how it will unfold. WSPA members don’t have a lot of production in the City of LA, but the CIPA does represent Freeport-McMoRan, which operates the Inglewood Oilfield, which would be heavily impacted by the ordinance.”

Most of the Inglewood Field is outside the city boundaries, but some 3,000 b/d of production comes from within the LA city limits there, Zierman said. “There is a total of some 15,000 b/d produced in that field,” he said.

The drilling is focused on oil, and most of the gas produced is associated with oil and other liquids.