After rallying to start the week, natural gas futures prices gave up ground for a second consecutive session Wednesday as the market looked ahead to what was expected to be a near-average weekly inventory report. The October Nymex futures contract settled 3.1 cents lower at $2.637/MMBtu after trading as high as $2.696 and as low as $2.603. November settled at $2.665, down 3.5 cents. 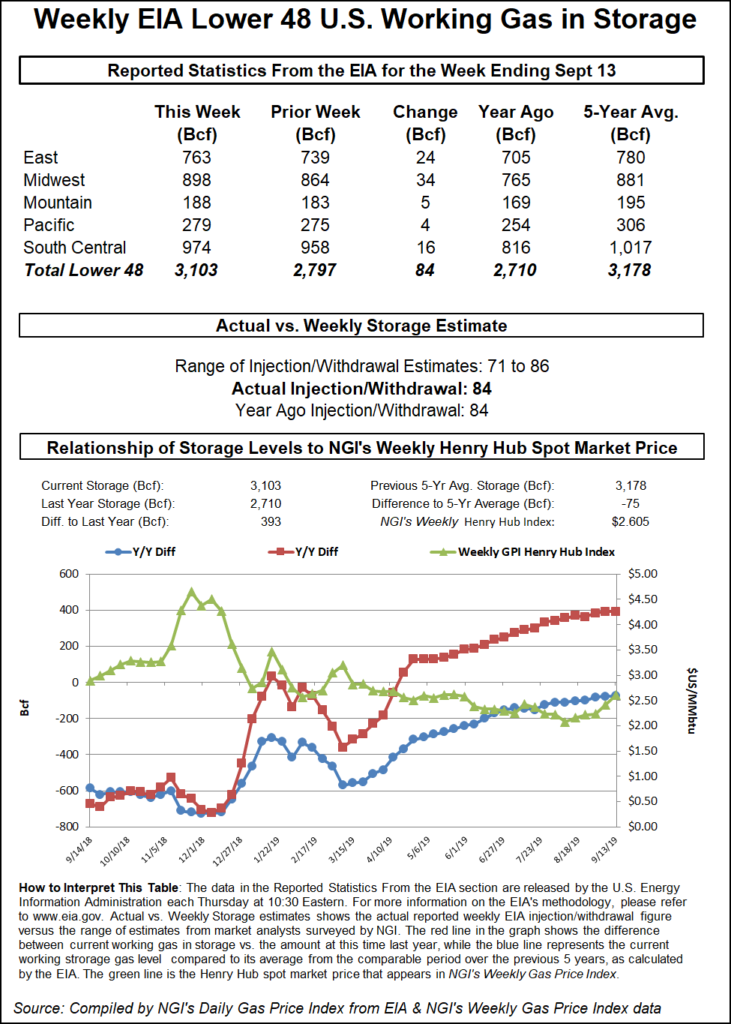 In the spot market, cooler conditions in the Northeast and in the West, along with heavy tropical rains along the Gulf Coast, helped drop NGI’s Spot Gas National Avg. 6.0 cents to $2.310.

The selling Wednesday followed a “long liquidation pattern,” possibly from traders “who bought it on Monday thinking it was going to go higher,” according to INTL FCStone Financial Inc. Senior Vice President Tom Saal.

Saal noted that prices bounced after dropping to around $2.600, signaling support at that level.

“If it was going to fall down and head straight south again, I think it would have kept going lower,” he told NGI.

Prices have gained sharply since late August, and while the momentum from that rally has slowed, there could still be upside from current levels, according to Saal.

“Going into the period now,” those buying to top off storage ahead of the winter “might push up the cash prices short-term,” Saal said. “It’s kind of a tough call, really, but I think the combination of what happened last year” with prices spiking on early winter cold “and funds still being net short is kind of a bullish scenario.

“The market should show some respect to last year, and the funds are still net short. They may want to cover more, so there’s some additional buying pressure.”

Estimates as of Wednesday showed the market expecting a near- or slightly below-average build from this week’s Energy Information Administration (EIA) storage report. A Reuters survey produced a 78 Bcf consensus, with predictions ranging from 71 Bcf up to 85 Bcf.

Last year, EIA recorded an 84 Bcf build for the period, and the five-year average is an injection of 82 Bcf.

Looking at the supply picture, production has been in a “moderate retreat” recently, according to Genscape Inc.

“Lower 48 production has been underperforming of late, though we have increased our long-range expectations for growth,” Genscape senior natural gas analyst Rick Margolin told clients Wednesday. “Our top-day estimate of Lower 48 production is showing a day/day drop of more than 0.8 Bcf/d. While top-day estimates tend to get revised up during shoulder season, over the past seven days production is averaging 90.66 Bcf/d, which is nearly 0.95 Bcf/d below the prior 30-day average and a full 1 Bcf/d below our forecast for the month.”

Even so, the firm has increased its long-range production expectations.

“In our latest major production forecast update published Monday, we increased our outlook for Calendar 2019 production by nearly 0.5 Bcf/d,” Margolin said. “We are now looking for a year/year production gain of more than 7.6 Bcf/d.”

On the demand side, EBW Analytics Group estimates that liquefied natural gas (LNG) feed gas demand has rebounded to near-record levels after recently pulling back by as much as 1.3 Bcf/d from highs in early September.

“This is despite a continued lack of demand from Freeport LNG, with the potential to increase volumes another 0.5 Bcf/d if Freeport is able to ramp up feed gas demand,” according to EBW. “The risk of tropical storms temporarily limiting exports in the weeks ahead, however, should not be dismissed lightly.”

Storage inventories in Europe are approaching full capacity, but “a combination of French nuclear outages and a reduction in Russian gas exports has led to a rally” for Dutch TTF (Title Transfer Facility) prices, the EBW analysts said. This helps mitigate “any concerns over prolonged economic shut-ins for U.S. LNG this fall.”

Still, analysts at Rystad Energy advised caution when interpreting statements from Saudi Aramco indicating a quick restart for oil production impacted by the attack over the weekend.

“Don’t get too excited,” Rystad chief oil market analyst Bjørnar Tonhaugen said. “There is clear risk of a slower restart of Saudi Arabian oil production despite the optimistic guidance by Saudi Aramco.”

Rystad estimates that up to 1.6 million b/d of Arab Light and 0.35 million b/d of Arab Extra Light production will remain shut in on average for September and October. It could be late in 2019 before processing capacity returns to pre-attack levels, according to the firm.

“In our view, there is a clear risk of a slower resumption towards full capacity,” Tonhaugen said. “Repairs to the damaged spheroids and stabilization towers involve, to our understanding, access to expertise and spare parts which could take time to procure. Unless repairs happen much quicker than we expect, we estimate that the Abqaiq processing facility will only reach 90% capacity by mid-November.

“The outage would then be reduced to 0.5 million b/d for the month of November at 5.2 million b/d. For now, we expect production to remain slightly below full capacity for December.”

Meanwhile, analysts at IHS Markit concluded in a research note released Wednesday that the initial 15% jump in oil prices following the events in Saudi Arabia will have no impact on U.S. shale production in 2019.

“Looking ahead, any effect on 2020 growth will also be muted unless prices are sustained above the mid-$70s level,” IHS Markit Executive Director Raoul Leblanc said.

“This is a zero-sum game between reinvestment for growth and returning cash to shareholders,” Leblanc said. “Last time producers faced this choice as oil prices rose in early 2018, they ended up spending a large portion of that windfall, causing production to surge and eventually aiding the collapse of oil prices and their equity values. Expect things to be different this time around, because investors are forcing them to respond differently.”

After surging nearly 50 cents in Tuesday’s trading, SoCal Citygate prices tacked on another 3.5 cents Wednesday to average $3.175. SoCal Border Avg. picked up 4.5 cents to $2.530. Price action in Southern California this week has been shaped by a combination of mild temperatures and the start of a new round of import constraints.

Utility SoCalGas (Southern California Gas) has notified shippers that it plans to take its Line 4000 import line out of service for validation digs starting Thursday. The preliminary return-to-service date is Nov. 14.

This work should drop imports through the Topock and Needles Area Zone to zero, restricting interconnects with El Paso Natural Gas, Southern Trails and Transwestern, according to Genscape.

“Reroutes do not appear to be a possibility for this event,” Genscape’s Margolin said. “…Earlier this month, capacity through the Needles/Topock Zone was curtailed and led to SoCal Citygate basis reaching summer-to-date highs. The event — which ran from Sept. 3-9 — cut Topock point capacities to zero and curtailed about 150 MMcf/d of flow.

“Historically, displaced Topock flows get re-routed into the market through Needles. However, during this event, Needles flows only increased by about 50 MMcf/d. The rest of the deficit was made up for by recent summer-record-high storage withdrawals from inside the market” enabled by additional use of the restricted Aliso Canyon storage facility.

SoCal Citygate basis should increase during the upcoming maintenance to encourage additional storage withdrawals, given a lack of available re-routes through Needles, according to Margolin.

“In the near-term, additional gains are likely to be much smaller with below-average temperatures forecast for the region,” the analyst said. “However, the duration of the event means weather changes and storage inventories will contribute to volatility in the area.”

The NWS was expecting “very slow movement” for Imelda over the next few days, with the storm making its way across eastern Texas.

“This will support very heavy rainfall potential for portions of eastern Texas into western Louisiana,” the forecaster said. “Additional rainfall amounts of five to 10 inches are expected” for these areas, “with isolated storm totals as high as 20 to 25 inches.”