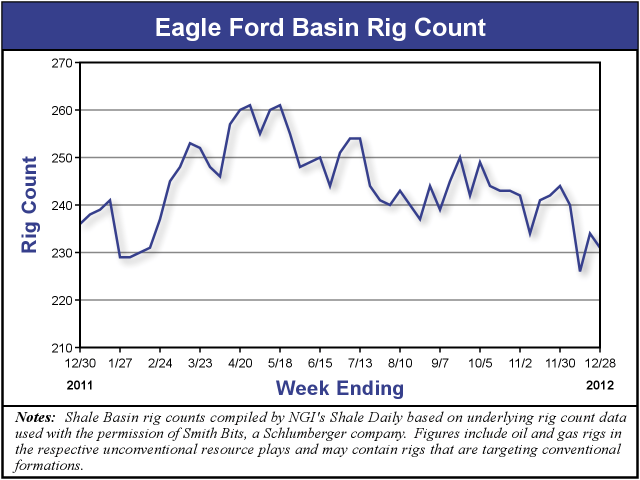 Fractionator I is the first of two 100,000 b/d fractionators that Lone Star is placing in service to meet the critical NGL fractionation needs due to prolific NGL production in the Permian and Eagle Ford regions. Fractionator II is scheduled to be completed in the fourth quarter of 2013. And the partnerships said Lone Star continues to evaluate additional fractionation expansion opportunities in Mont Belvieu.

ETP also announced that its 200 MMcf/d Karnes County Processing Plant is in service. The plant and phase one of the partnership’s Jackson Plant, which is due to provide an additional 400 MMcf/d of capacity upon completion in the first quarter of 2013, “are an integral part of Eagle Ford Shale projects coming on line in the next several months that will provide significant cash flow to the partnership,” ETP said.

The Eagle Ford remains the most active of the nation’s shale plays, with 231 rigs operating in the week ending Dec. 28, according to NGI‘s Shale Daily Unconventional Rig Count. That was three fewer rigs than a week earlier and five fewer than at the end of 2011.